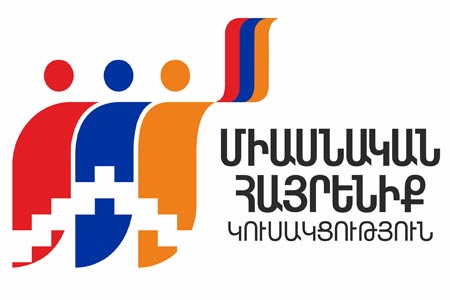 ArmInfo. Below is a statement of the United Homeland party on the Developments around the Nagorno-Karabakh conflict.

"The trilateral meeting of the Prime Minister of the Republic of  Armenia NikolPashinyan, the President of the European Council Charles  Michel and the President of the Republic of Azerbaijan IlhamAliev  took place in Brussels on May 22, 2022, as a result of which, in  connection with the statement spread by the President of the Council  of Europe, the "United Homeland" party announces:  "1. The well-known  trilateral statement of November 9, 2020 stated that the Republic of  Armenia is no longer the guarantor of the security of the Artsakh  Republic, with the same statement it was undertaken by the Russian  Federation, deploying peacekeeping troops in parallel with the  withdrawal of the Armenian Armed Forces.Therefore, ensuring  stability, security in the South Caucasus region, including the  establishment of relations between Armenia and Azerbaijan, and the  settlement of the Nagorno-Karabakh conflict without the mediation of  Russia is practically unpromising and fruitless.  "2. The only de  facto mandate for the peaceful settlement of the Nagorno-Karabakh  conflict from the complex ethno-political conflicts in the South  Caucasus rests with the OSCE Minsk Group;other approaches to the  subtleties of the problem that go beyond this dimension are  unacceptable.

"As the Republic of Artsakh is not involved in the negotiation  process of the conflict settlement as an independent entity, Armenia  has the right to negotiate on its behalf; therefore the Armenian  authorities are obliged to:  "Obtain the consent of the people of  Artsakh and the authorities elected by them on the main principles  and elements of the negotiations; "Negotiate on the Nagorno-Karabakh  conflict either only within the framework of the OSCE Minsk Group or  in the Armenia-Russia-Azerbaijan trilateral dimension, which has  another precedent.  "The efforts of the related mediations can and  should be aimed at encouraging or supporting the final settlement of  the Nagorno-Karabakh conflict within the framework of the  above-mentioned measures.

"3. The active mediation efforts of the Council of Europe in the  issues of Armenia-Azerbaijan border, unblocking of infrastructure,  peace agreement, and economic development are aimed at overcoming  Europe's dependence on Russia by using Azerbaijan's gas potential.   "In the context of such mutually beneficial expectations, the Council  of Europe cannot maintain a mediating balance between Armenia and  Azerbaijan, including in the settlement of the Nagorno-Karabakh  conflict, so any mediation by it will be compromised by the  components of Artsakh's security system. This is evidenced by the  vocabulary of the President of the Council of Europe, who avoids even  using the phrase "NagornoKarabakh".  "We consider the tolerance and  introduction of such a speech by the Armenian authorities or an  international organization on the agenda of the NK conflict  settlement unacceptable and inadmissible.

"4. The non-fulfillment of the agreements reached by the Azerbaijani  authorities in the trilateral statement of November 9, 2020 and the  aggressive rhetoric are inversely proportional to the agreements  reached between Armenia and Azerbaijan as a result of various  mediations.

"A comprehensive and final solution to the Nagorno-Karabakh conflict  is possible only through horizontal communication with the people of  Artsakh and the government elected by them, and not through declaring  them internationally wanted, committing crimes against humanity,  organizing information-psychological terrorism, and creating an  environment of creping aggression.

"The United Homeland party reaffirms its commitment to refrain from  actions that do not reflect the challenges on the agenda and  practical solutions to their solution, on the grounds of which the  party's parliamentary faction refused to join the statement spread by  the NA factions of the Republic of Artsakh on May 24."