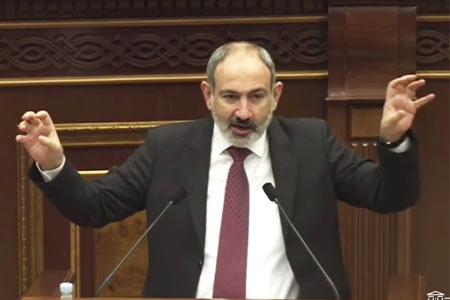 ArmInfo.RA Prime Minister Nikol Pashinyan considers it important to formulate and discuss the peace agenda proclaimed by the authorities, since the most important  decisions in the country are "ultimately taken by these citizens."  The prime minister stated this on May 20, speaking at the "Armenian  Democracy Forum".

According to Pashinyan, it is very important to formulate and discuss  the peace agenda, to explain it to citizens, since the most important  decisions in the country are ultimately made by these citizens. "It  is very important that we provide the citizen with complete and  proper information so that he or she is sufficiently informed when  making decisions," he said.

According to him, the fact that recently the authorities often turn  to issues related to the peace agenda, the negotiation process, some  interpret this as a discussion between the former and current  authorities.  However, the Prime Minister assured that this is not  the case. "I, our government, our political team consider it our duty  to provide citizens with enough information about what happened to us  so that the citizen realizes the depth of the problem, and in the  future makes decisions that heshe must make. By the way, based on  the analysis of this information, the RA citizen has already made  decisions>, he said.

At the same time, as the prime minister noted, today, in order to  strengthen democracy, it is very important to unite around the  mission "to bring peace to the Republic of Armenia". "I think that  all the democratic forces of the Republic of Armenia should unite  around this mission, because one is a continuation of the other. Of  course, this does not mean that we should have the same point of view  and vision on all issues.  But again, I think that at this stage it  is very important that we unite, honestly look into each other's  eyes, analyze the history of our country over the past 30 years, and  be able to do this in an environment of sincerity, in an environment  of honesty," Pashinyan said.