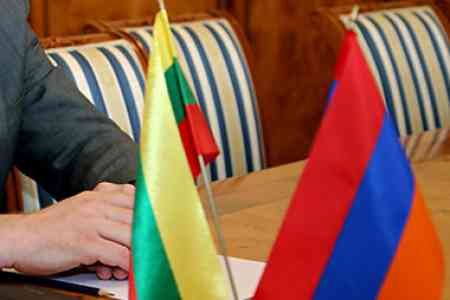 "The positions of Armenia and Lithuania on this issue are similar.  The need to protect Armenian cultural monuments in Artsakh and in the  territories that have come under Azerbaijani control was especially  indicated. The President of Lithuania promised to contribute to the  preservation of the Armenian Christian heritage in every possible  way," Khachaturian said, adding that in this context the importance  of the visit of the UNESCO expert mission to Artsakh and the  territories that have passed under the control of Azerbaijan was  noted.

Speaking about the Armenian-Lithuanian relations, Khachaturian highly  appreciated their level, based on historical ties. In this vein, he  pointed to the mutual readiness to develop and strengthen relations  between Armenia and Lithuania. "During the meeting, issues related to  the deepening of economic relations and increasing the volume of  trade were discussed in particular. In this vein, the prospects for  cooperation in the fields of industry, IT, agriculture, education  were discussed. We are pleased to note that the delegation of the  President of Lithuania included rectors of Lithuanian higher  educational institutions, which is proof of the importance of the  scientific and educational sectors in our bilateral relations," the  RA leader said, adding that issues of cooperation between Armenia and  the European Union were also discussed during the meeting.