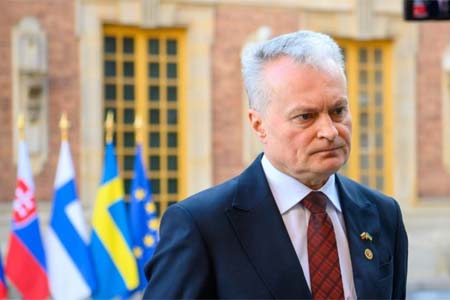 He recalled President of the European Council Charles Michel's  relevant efforts, which, he said, deserve supporting. Mr Nauseda said  this is his first visit to Yerevan and he is impressed with the  hospitality shown him. Lithuania has been supporting Armenia's  efforts to adopt democratic values since Armenia and Lithuania  established diplomatic relations.  Lithuania is contributing to  Eastern Partnership projects.

"We believe it is a highly important instrument. Lithuania is  contributing to Armenia's integration into the European family," Mr  Nauseda said. He welcomes the Armenian government's efforts,  especially its efforts at reforming the country judicial system. Mr  Nauseda hopes Armenia will continue its democratic progress, which  will lead to its economic and social progress.

"This morning I visited the Memorial to the Armenian Genocide victims  and laid flowered at the Eternal Flame. This is what must never recur  on Earth. And it is relevant now that war is taking place in Ukraine.   We must not forget that freedom is just now important for the entire  world. We must not forget the values Ukraine is fighting for now," Mr  Nauseda said.

He is confident that his visit will give new impetus to the bilateral  relations, which have serious untapped potential.

Armenia's Premier Nikol Pashinyan, President of the European Council  Charles Michel and President of Azerbaijan are expected to hold a  meeting in Brussels, May 22.