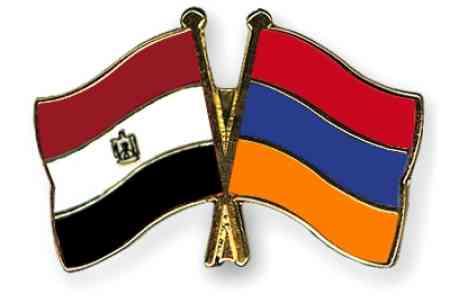 According to the press service of the RA Prosecutor General's Office,  the meeting discussed issues of expanding cooperation between the two  bodies in the field of transnational crime, especially corruption,  money laundering and asset recovery.

Artur Davtyan highlighted the fact that his visit takes place at a  time when Egypt is chairing the Conference of the States Parties to  the UN Convention against Corruption. The Egyptian Administrative  Control Authority, headed by Hassan Abdul Shafi Ahmed Abdul Ghani,  who chaired a regular meeting of the conference last year, plays a  key role in the country's law enforcement system, especially in the  fight against corruption. Considering this circumstance, Artur  Davtyan expressed hope that the parties will be able to work out  stable structures of mutual assistance both in bilateral and  multilateral sectors.

He stressed that the fight against corruption, in this context, the  return of assets illegally taken out of Armenia is currently one of  the unconditional priorities of the RA Prosecutor's Office. To this  end, the RA Prosecutor's Office is expanding its international  cooperation, where cooperation with Egypt is a possible step towards  establishing a new quality of legal relations with the Arab world.  Hassan Abdul Shafi Ahmed Abdul Ghani confirmed the interest of the  body headed by him in further deepening cooperation with the RA  Prosecutor's Office in the fight against crimes considered a priority  for both countries.