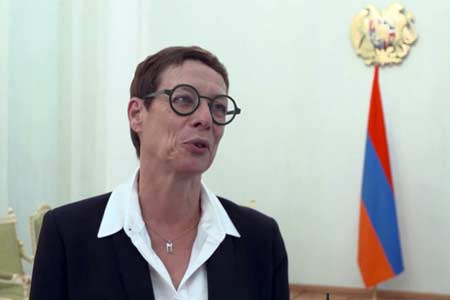 According to the press service of the Ministry of Education and  Science of the Republic of Armenia, issues of further strengthening  relations between the two countries in the field of culture, as well  as expanding and enriching the agenda of the Armenian-French  cooperation were discussed at the meeting.  According to Khzmalyan,  bilateral cooperation should be based on institutional pillars in  terms of the implementation of strategic programs.

"Our task is to establish relations between the major cultural  institutions of the two countries. For example, cooperation in the  film industry will be effective if our programs are not limited to  one master class, but there is cooperation between the National Film  Center of Armenia and the French CNC. I would like these projects to  carried out institutional reforms, for example, introduced the FEMIS  educational method in Armenia, or so that Armenian students have the  opportunity to receive education in this educational institution," he  said.

Khzmalyan touched upon the possibility of joint film production, and  in this context, the signing of an interstate agreement, as well as  the maximum involvement of the French Armenian community in joint  programs.

The Armenian side thanked the French government for the  implementation of the grant program in the field of Armenian culture,  within the framework of which a number of important projects of  long-term importance for the country will be implemented.

In turn, the French Ambassador noted the importance of establishing  annual priorities between the two countries for discussing cultural  heritage issues. Touching upon the issues of film production, the  Ambassador stressed that a visit of representatives of the French CNC  and FEMIS, as well as an expert mission to Armenia, could be  organized to discuss issues of further cooperation.  Anne Louyot also  presented three possible areas of the French government's cultural  grants program in Armenia: training courses on the restoration of  cultural heritage, work on the restoration of the Great Desert of  Tatev, and support for the reorganization of the exhibition in the  Erebuni Museum. According to her, the partner institutions in these  areas are the French National Institute of Cultural Heritage, the RA  Historical and Cultural Heritage Research Center, the Louvre and the  Erebuni Museum. The Ambassador stressed the need to form a Governing  Council within the framework of the above mentioned program. During  the meeting, the parties also touched upon other issues of mutual  interest in the field of culture.