Nikol Pashinyan reproached CSTO: The reaction of the organization  during the 44-day war was not so inspiring for  the Armenian people 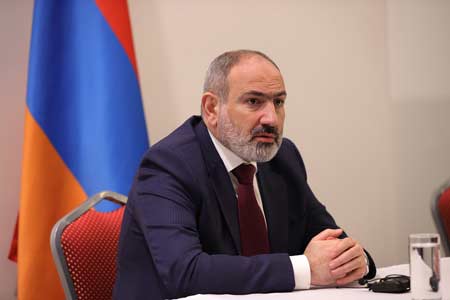 ArmInfo.Armenian Prime Minister Nikol Pashinyan criticized the actions of the Collective Security Treaty Organization (CSTO) during the conflict with Azerbaijan. He also called on the member countries of the organization to synchronize  actions.

According to Pashinyan, the anniversary of the organization  is a very good occasion to sum up some results and discuss the  prospects for the further development of the organization. "There is  a lot of positive in the history of the CSTO, because in fact the  CSTO has been and will be the most important factor in ensuring  security and stability in the region," he said on May 16 at the  anniversary meeting of the leaders of the CSTO countries in Moscow.

He agreed with the President of Belarus Alexander Lukashenko, who had  previously raised important and problematic issues regarding the  interaction between the CSTO member countries. , Pashinyan said.

The Prime Minister touched upon the effectiveness of the  military-political bloc's rapid reaction mechanisms. He recalled that  last year these days, Azerbaijani troops invaded the sovereign  territory of Armenia, and the latter turned to the CSTO to activate  mechanisms to prevent crisis situations. "But, unfortunately, we  cannot say that the organization reacted as the Republic of Armenia  expected," Pashinyan said.  The Prime Minister of the Republic of  Armenia, which currently chairs the CSTO, also recalled that the  republic had long raised the issue of selling weapons to Azerbaijan,  an unfriendly country of Armenia, by some CSTO states.

At the same time, the head of government emphasized the special role  of the Russian Federation and personally Russian President Vladimir  Putin in the suspension of the war in Nagorno-Karabakh. "I want to  reaffirm that Armenia continues to be committed to the tripartite  statements of November 9, 2020, January 11 and November 26, 2021,  signed by the leaders of Russia, Armenia and Azerbaijan," he  stressed.  As Pashinyan pointed out, Armenia, as a founding member of  the CSTO, is committed to fulfilling its obligations and considers  the Organization a key factor in stability and security in the  Eurasian region and for the Republic of Armenia. "Armenia is  generally positively disposed to fully support the Organization and  its further development," the RA Prime Minister summed up.