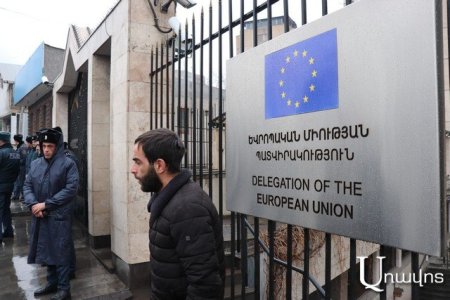 ArmInfo.A group of citizens held a protest in front of the EU Delegation to Armenia.  Citizens came to the building of the representation with posters showing  the use of violence by the police against peaceful demonstrators.

The protesters chanted "Don't be silent", "It's time to speak, Madam  Ambassador", "Shame". The demonstrators called on EU Ambassador to  Armenia Andrea Wiktorin not to turn a blind eye to the use of  disproportionate force by the police against peaceful demonstrators  demanding the resignation of the current RA Prime Minister Nikol  Pashinyan.

At the same time, the Resistance Movement is holding a motor rally in  different districts of Yerevan.

The Coordinator of the Resistance Movement, Vice Speaker of the  Armenian Parliament from the "Armenia" faction Ishkhan Saghatelyan  announced yesterday that the actions of disobedience would resume in  the morning. He emphasized the importance of increasing the number of  actions and their participants.

Saghatelyan also said that on May 12, after the rally at 4:00 pm,  they will again gather for a rally in France Square. It should be  noted that on April 17, the head of the opposition parliamentary  faction "I have the Honor" Artur Vanetsyan launched an indefinite  rally on Freedom Square in Yerevan in defense of Nagorno-Karabakh and  demanding the resignation of the current Prime Minister of the  Republic of Armenia Nikol Pashinyan and his team. He called on to  join his protest action. His initiative was supported by the  opposition factions "I have the honor" and "Armenia", as well as the  "5165" party. And since May 1, a tent camp of opposition forces has  been set up on France Square, demanding the resignation of Pashinyan  and his team. Since May 1, activists of the movement have been  spending the night on the street, and during the day they carry out  actions of disobedience, blocking capital and regional roads. Police  use disproportionate force against peaceful protesters while  reopening roads and restoring traffic.  The night before, members of  the Resistance Movement blocked all entrances and exits to the  Yerevan City Hall for an hour.