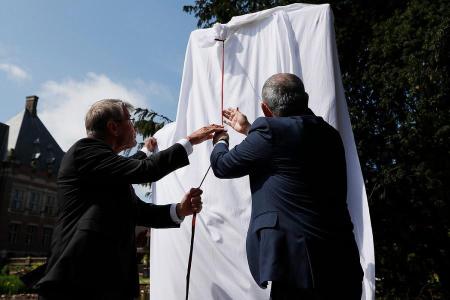 ArmInfo.Within the framework of the official visit to the Kingdom of the Netherlands, Prime Minister Nikol Pashinyan visited the Peace Palace in The Hague.

As the press service of the RA PM reports, the Prime Minister was  welcomed here by Piet Hein Donner, President of the Board of The  Hague Academy of International Law and Chairman of the Carnegie  Foundation Peace Palace.

The Prime Minister first toured the Peace Palace, then took part in  the inauguration ceremony of the Armenian khachkar in the latter's  yard.

In his speech, Prime Minister Pashinyan, in particular, noted.

"Dear President of the Carnegie Foundation,

I would like to thank you for being with us today on this beautiful  morning in the city of peace and justice, at the premises of the  Peace Palace - the temple of Peace, as Andrew Carnegie coined more  than 100 years ago, and which is the house of such an important  International institution as the International Court of Justice.

It's a great honor for me to inaugurate on behalf of my nation an  Armenian Khachkar or Cross-Stone as a gift from Armenia.

This is a history that we create together with you today, since the  first ever Armenian cross is being erected in a city, which is known  as the world's capital of international law and justice.  There are  more than 50,000 Khachkars and each of them has its own unique  features. The symbolism and craftsmanship of Khachkars has been  inscribed in 2010 on the UNESCO's Representative List of the  Intangible Cultural Heritage of Humanity.   The cross-stone is a unique manifestation development of Armenian  culture; it is one of the most characteristic symbols of the Armenian  identity. Having behind more than thousands years of history, the  cross-stone is also a contemporary cultural phenomenon.

The Armenian people install cross-stones both in Armenia and in those  hospitable countries, where they settle down due to different  circumstances. Thus, the cross-stone has become a symbol and message  of friendship, solidarity, cooperation and gratitude.

For millennium Armenia and Armenians have strived for peace, as the  ultimate goal to live and create in their homeland. Our Government is  currently doing its utmost to promote the peace agenda in the region,  despite the existential threats my nation is still facing.

This Cross-Stone - Khachkar symbolizes the Armenian understanding of  peace and resilience and constant struggle for peace, be it in  Armenian highlands and elsewhere.

Khachkar is a masterpiece and symbol of Armenian culture, its essence  and has in itself the message of peace, carved in the stone that  remains intact during the centuries. This is why the Khachkar was  chosen as a gift to the Peace palace to symbolize generations of  Armenians, who contributed to the peace in the World.  With this  donation Armenia boldly reiterates its solid commitment to continue  its contribution to the peace in our region and worldwide".

Piet Hein Donner, President of the Board of The Hague Academy of  International Law and Chairman of the Carnegie Foundation Peace  Palace, thanked for donating an Armenian khachkar to the Peace Palace  and expressed confidence that it will occupy a unique place in its  territory.