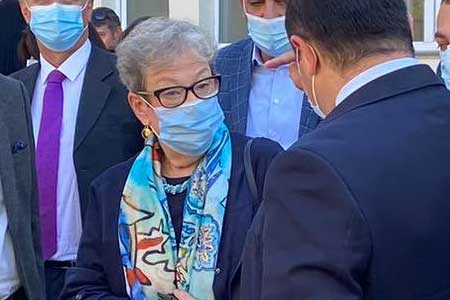 ArmInfo.The European Union follows the situation inside Armenia, conducts monitoring. Head of the EU Delegation to the Republic of Armenia Andrea Wiktorin stated  this on May 10 at a press conference in Yerevan dedicated to the 30th  anniversary of the establishment of diplomatic relations between  Armenia and the European Union, in response to a request to assess  the Armenian internal political processes.

The diplomat stated that such processes are inevitable. At the same  time, she recalled that representatives of diplomatic missions do not  participate in these processes.

"This is our key principle. We have seen many situations, and  sometimes questions are voiced. I clearly stated that the police must  also strictly obey all laws and regulations, the police must not be  unpunished.  But, I would also like to note that there are different  situations, different perceptions, for example, about peaceful  demonstrations. Of course, there are provocations, and I would ask  myself how to act in such cases.  For me, the most important thing is  how the EU can contribute to democracy and sustainable development in  Armenia, while respecting the rule of law while demonstrating  economic progress. We need a strategy.  You need to ask the citizens  of the Republic of Armenia what you want to do to make your life  better and listen to the answers," Wiktorin summed up.

It should be noted that on April 17, the head of the opposition  parliamentary faction "I have the Honor" Artur Vanetsyan launched an  indefinite rally on Freedom Square in Yerevan in defense of Nagorno-  Karabakh and demanding the resignation of the current Prime Minister  of the Republic of Armenia Nikol Pashinyan and his team. He called on  everyone to join his protest action. His initiative was supported by  the "I have the honor" and "Armenia" opposition factions, as well as  the "5165" party. And since May 1, a tent camp of opposition forces  has been set up on France Square, demanding the resignation of  Pashinyan and his team. Since May 1, activists of the movement have  been spending the night on the street, and during the day they carry  out actions of disobedience, blocking metropolitan and regional  roads. Police use disproportionate force against peaceful protesters.