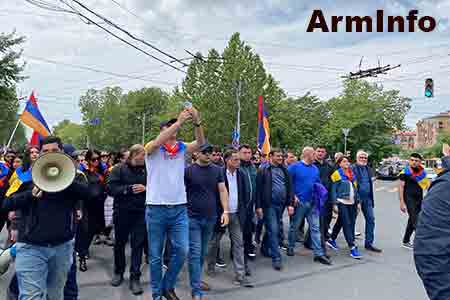 ArmInfo.As of 3:30pm Yerevan time, 59 participants in the protest actions of the Resistance Movement were detained by the Police of Armenia. Edgar Janoyan,  Deputy Head of the Public Relations and Information Department of the  Armenian Police, told ArmInfo.

"All the above-mentioned persons were detained under Article 182 of  the RA Criminal Code - disobedience to the lawful demands of police  officers," he said.

At 12:30pm local time, actions of disobedience resumed in Yerevan.  The demonstrators marched peacefully from France Square in four  directions: Sayat-Nova, along Mashtots avenue, along Baghramyan  avenue, in the direction of Koryun street. Each of the directions is  headed by opposition MPs of the "Armenia" and "I have Honor" blocs.

Some time later, while trying to completely block traffic across the  Victory Bridge, clashes broke out between peaceful demonstrators and  policemen. The police tried to unblock traffic at this transport hub.   Then a scuffle took place near the Yerevan Municipality. Clashes also  took place on Baghramyan Avenue.  The demonstrators accuse the police  of provocative actions and the use of disproportionate force.

The march of the opposition forces through the streets of Yerevan  continues.

Since May 1, a tent camp of opposition forces has been set up on  France Square, demanding the resignation of Pashinyan and his team.  Activists of the movement have been spending the fifth night on the  street.  Traffic is blocked not only along the central roads of  Yerevan, but also key regional transport hubs.