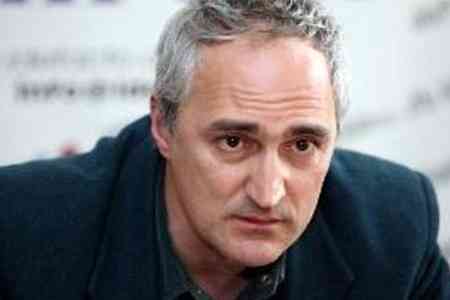 ArmInfo. In an interview with ArmInfo, Tigran Khzmalyan, Chairman of the European Party of Armenia (EPA), said that, although his judgment is not impartial, he believes  the opposition forces' regular attempts to change the power in  Armenia have nothing in common with democracy.

"On the other hand, the political processes are not escalating into  serious clashes - and that's something.  However, the opposition's  slogans reflect its own utopian ideas and are actually the main  obstacle to the protests developing into a nationwide movement. Yes,  people may fail to understand a lot, but one feeling - mistrust - may  compensate for many things. And this feeling toward the leaders of  the protests outweighs all the mixed feelings the society has toward  the authorities," Mr Khzmalyan said.

Last summer, many observers at the early parliamentary elections  could hardly think the political forces responsible for the defeat in  the 44-day war would be reelected. However, "what seemed impossible  turned out to be possible", primarily due to the "former ones",  particularly due to their outstanding ability to instill hatred and  distrust of themselves in society, Mr Khzmalyan said.

According to him, the selfish economic interests of some "actionists"  are one of the reasons for protests, and many of the "former ones"  are still in control of banks, mines and other industrial facilities,  owning numerous properties in Armenia. So they hope to protect their  possessions in this way. However, the very participation of the  former leaders in the protests puts off potential protesters against  Armenia's incumbent authorities.

The "ideology" of the movement leaders is, in fact, a paradox. "These  people had to stop robbing for a certain period and are now seeking  power to 'offset the losses' sustained during the 'forced outage,'  using the very people they had been robbing for decades to regain  power. But the people's memory is not that short," Mr Khzmalyan said.