It will be hot in Yerevan in summer: Music of legendary 50 Cent, ZAZ  and Led Zeppelin will be played at Hrazdan Stadium 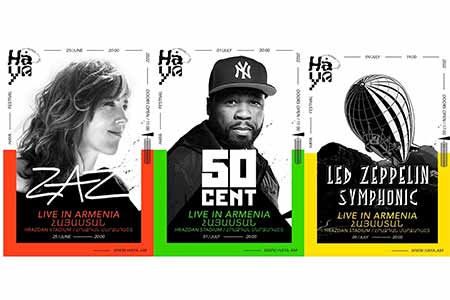 ArmInfo. The concert of  legendary American rapper Curtis James Jackson III, known as 50 Cent, will be held on July 1 at "Hrazdan" stadium . This is stated in the  official message of the HAYA Festival, which is the organizer of the  concert.  According to the source, the concert will take place at  8:00 at the "Hrazdan" stadium . Ticket prices start from 30 thousand  drams to 300 thousand drams.

In his microblog on Twitter, 50 Cent, posting a poster about the  upcoming concert in the Armenian capital, wrote: ""Yerevan, Armenia!  It's going down Friday July 1st at the Hrazdan Stadium for HAYA  Festival. We're going to have a good time! Don't Miss Out! Get your  Tickets Now".  50 Cent is an American rapper, actor, writer,  producer, boxing promoter. After the release of the first album Guess  Who's Back, Eminem became interested in him, as a result of which an  agreement was signed with the American Interscope Records. With the  help of Eminem and Dr. Dre, 50 Cent becomes one of the most in-demand  rappers in the world.

The Get Rich or Die Tryuin (2003) and Massacre (2005) albums have  successfully sold over 40 million copies worldwide. The most popular  tracks of 50 Cent are Candy Shop, In da Club, Disco Inferno, P.I.M.P,  etc. As stated on the official Facebook page of the festival, the  first solo concert of the famous French singer ZAZ will also take  place at the "Hrazdan" stadium on June 25.

In addition, the HAYA Festival is preparing a surprise for fans of  the music of the legendary rock band Led Zeppelin. With the support  of the band members themselves, the Led Zeppelin Symphonic project  will be presented in Armenia on July 9 at the "Hrazdan" stadium,  within which Led Zeppelin songs will be performed by musicians from  the London West End, accompanied by the best British rock band and  symphony orchestra. In total, 25 compositions will be presented to  the Armenian public, including Whole Lotta Love, Black Dog, Kashmir,  Rock & Roll, Dazed & Confused, Stairway to Heaven, etc. It should be  noted that the HAYA Festival is an initiative whose mission is to  create Armenia of a new format and standards of concert cooperation.

The festival provides for holding large-scale events, the number of  spectators at which will exceed 10,000.  The initiative intends to  open a new page for Armenia's tourism and become an incentive for the  country's economic development. The founder of the festival is  director of the International Music Festival "Yerevan Perspectives"  Sona Hovhannisyan.