The Will to Get Back on Your Feet Again: A movie that came out at the  right time 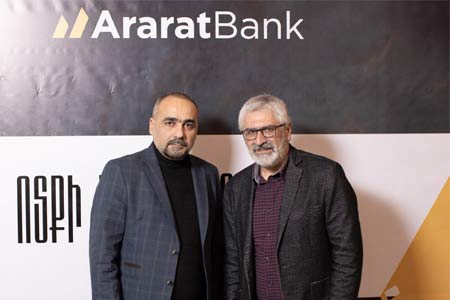 ArmInfo. On the day of the 30th anniversary of the Armenian army, on January 28, a documentary film directed by Vahe Sukiasyan The Will to Get Back on Your Feet  Again was screened at the "Moscow" cinema. The documentary was  released with the support of Araratbank OJSC.

In the documentary, which lasts more than 45 minutes, a number of  famous Armenian actors talk about the most heroic victories of  Armenia, betrayals, the will to stand up after the most difficult  defeats, and the true reasons for these defeats. In fact, the film  provides answers to a number of important questions that lie in the  bins of the story itself.  Presenting the film, Anna Allahverdyan,  Advisor to the Executive Director for Public Relations of Araratbank,  noted that initially the target audience of Vahe Sukiasyan's  documentary films were students aged between 13 and 16. However, after  a closed screening, which took place in November 2021, everyone  agreed that the film does not have any age restrictions and may be of  interest to everyone who is not indifferent to history, historical  facts and events.

According to her, Araratbank, as part of its corporate  responsibility, has reached an agreement with a number of educational  institutions, where this film will also be screened. Moreover, the  screening of Sukiasyan's film will be organized in Belgium, France,  the Czech Republic, Los Angeles, Munich, and a number of Russian  cities.

In turn, Suren Babajanyan, Head of Marketing and Banking Services  Sales Department of Araratbank, stressed that the main goal of the  film is to avoid repeating historical mistakes and the need to  rethink them. The film should show those qualities that lead the  people to victory, while mistakes and sins lead to defeat. , he said.

The director of the film, Vahe Sukiasyan, said that he worked on the  idea of the film together with historian Artak Movsiyasn. "We started  thinking about it back in 2015, since it was from this period that  the country experienced a downward trend in national values and  self-identity," the director said. According to him, the war of 2020  once again confirmed the possibility of making such a film, as it is  not the first time in our long history that our people are in such a  situation.  It is noteworthy that animation technique was used to  create the film. Such a move was due to the intention to make the  film more understandable and accessible to teenagers. The animator of  the film is Arthur Zakharyan. The work lasted over three months.

During the presentation of the film, it was also noted that its  script was subjected to professional psychological analysis. The  psychologist Solanzh Tamamyan worked with the creators of the  documentaries.

Having got acquainted with the idea of the film, Gisane Palyan noted  that she felt strong inspiration, but at the same time,  responsibility for participating in such an important work. According  to the musician, the film contains not only a patriotic message, but  also has great educational value, which is extremely important these  days.

It should be noted that the general producer of the film is Narek  Beglaryan, a Board Member of Araratbank OJSC. The film was shot as  part of Araratbank's corporate social responsibility strategy.