Eduard Aghajanyan: Recognition of the genocide has never been a  precondition for normalizing relations with Turkey 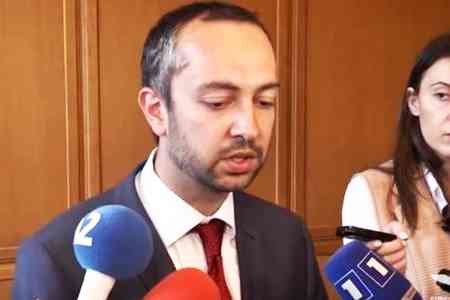 ArmInfo. Recognition of the genocide has never been a precondition for the normalization of relations with Turkey. Eduard Aghajanyan, Chairman of the Standing  Committee of the Armenian Parliament on Foreign Relations, stated  this during a press conference on January 27.

In particular, he stressed that throughout the history of independent  Armenia, the country's authorities have advocated the settlement of  Armenian-Turkish relations without preconditions.  At the request of  journalists, commenting on Prime Minister Nikol Pashinyan's statement  that the Diaspora has always been the driving force in the process of  recognizing the Armenian Genocide, Aghajanyan stressed that the  latter's role was more effective than Armenia's role as a state. "The  issue is not that the whole process and its results have been  attributed to the potential and activity of the Diaspora," he said.   When asked whether Armenian Special Representative for Normalization  of Relations with Turkey Ruben Rubinyan and Foreign Minister Ararat  Mirzoyan accepted the invitation of the Turkish side to take part in  the diplomatic forum to be held in Antalya, Aghajanyan said that  there is no final decision on this issue yet.

During the live broadcast, Armenian Prime Minister Nikol Pashinyan  noted that Armenia has never questioned the Armenian-Turkish border.  "You will not find a single Armenian leader or government that will  question the Armenian-Turkish border and we will continue this  policy," he said. The head of government also stressed that the  position on the recognition of the Armenian Genocide is expressed in  the government's program. "Nevertheless, we must state that the  Diaspora and its organizations have always been the driving force of  the process of recognizing the Armenian Genocide," he added.