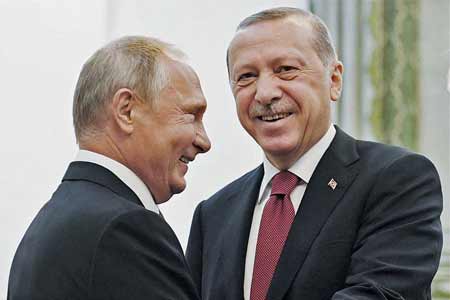 ArmInfo. Russian President Vladimir Putin will take advantage of the invitation of his Turkish counterpart Recep Tayyip Erdogan to visit Turkey as soon as the  epidemiological situation and schedules allow. Press secretary of the  Russian head of state Dmitry Peskov announced this, RIA Novosti  reports.

Earlier, Erdogan said that he had invited the Russian leader to  Turkey and was waiting for a response from the Kremlin.

"Yes, this topic has been repeatedly raised during the last few  contacts between President Putin and Erdogan," Peskov told reporters.

He noted that there was a certain pause in the holding of the  intergovernmental commission and the supreme body of bilateral  relations, which is headed by two presidents. Erdogan said he was  ready to host all these events in Turkey, he added. "President Putin  gratefully accepted this invitation. And they agreed that as soon as  a) the epidemiological situation and b) schedules allow, he will  definitely take advantage of this invitation," Peskov said.