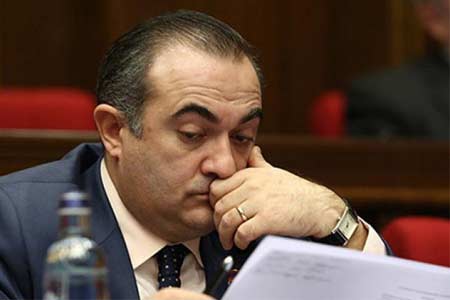 ArmInfo.Regrettably, after the signing of the trilateral agreement on November 9, 2020, Armenia really started to resemble a failed state, which, among other things,  could have been the "last drop" that made the president resign, Tevan  Poghosyan, Chairman of the International Center for Human Development  (ICHD) told ArmInfo.

"To our great regret, during the period that followed the 44-day  Azerbaijani-Turkish aggression against the Armenian people, only two  institutes - the Human Rights Defender's Office and the Central Bank  - remained 'afloat.' Organizing the work of the institute of  presidency, just as of any other government institution, requires  time. Much more so, time is required for setting and achieving goals.  I think President Sarkissian carried out relevant work all through  his term of office - up to that notorious 'last drop'," Mr Poghosyan  said.

As to what particularly proved to be that "last drop", Mr Poghosyan  referred to the text of Armen Sarkissian's statement. Specifically,  the points concerning his health, the goals he once set, but has  never achieved, a need for reforms that would enable the goals in  question to be achieved. According to Mr Poghosyan, the president  actually revealed his intentions and aims of his work in an attempt  to patch up the differences and remove obstacles to achieving the  aims.

In this context, Mr Poghosyan is raising a question about the  coincidence between Mr Sarkissian's decision to resign and his visit  to the United Arab Emirates (UAE) the other day, especially in the  context of opportunities for new, direct investments in Armenia.  According to him, this is one of the various scenarios that led to  his resignation. Mr Poghosyan points out a need for focusing on the  messages the president's statement contains, particularly on whether  problems facing Armenia need to be realized and discussed.

According to Armenia's Constitution, RA Parliament Speaker Alen  Simonyan will act as Armenia's President until the new presidential  election. Armenian mass media reported on Wednesday that the ruling  party Civil Contract has decided on its presidential candidate,  Arayik Harutyunyan, Head of the RA Premier's staff, which accounts  for the ongoing reshuffle. Specifically, Nairi Sargsyan has been  relieved of the post of Aide to the Premier and is expected to  supersede Arayik Harutyunyan as head of the RA Prime Minister's  staff.