Agnes Khamoyan: Robert Kocharyan will not run for president of  Armenia 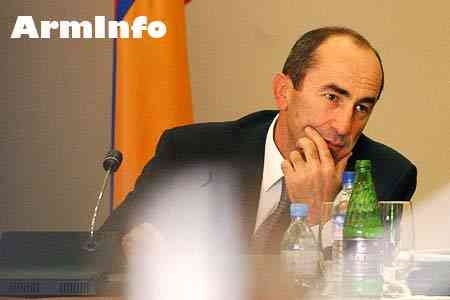 ArmInfo.Robert Kocharyan will not run for president of Armenia, stated MP from the "Armenia" bloc Agnes Khamoyan.

In this vein, she recalled the statement of Nikol Pashinyan, who  during the live broadcast, speaking about a possible candidate for  the post of head of state, pointed out the need for harmony between  the institutions of the President, Parliament and Government. Based  on this, the MP from the "Armenia" bloc admitted that one of the  members of the political team of the Prime Minister would be  nominated for this position.

Referring to the resignation of President Armen Sarkissian, Khamoyan  expressed indignation at the text he published, which refers to the  reasons for such a decision.

"The President himself complained about his functions, but at the  same time he signed a draft on the reduction of his functions," the  MP said.

On January 25, , during a briefing in the Parliament, Secretary of  the "Armenia" bloc Artsvik Minasyan said that the "Armenia"  opposition parliamentary bloc is going to nominate its candidate for  the presidency of the republic after the resignation of Armen  Sarkissian. "We have not yet had time to discuss a specific candidate  for the presidency, but, of course, we will nominate our own  candidate," he said.

Armenian President Armen Sarkissian has resigned. According to  Sarkissian, the reason for his resignation is the lack of appropriate  tools for the President, including the ability to influence "issues  related to war or peace". As stated in a statement published on the  website of the head of state, Sarkissian thought it thoroughly and  decided to resign from the position as president of the of the  Republic of Armenia almost four years of active work " This step of  mine is entirely non-emotional and comes from a certain logic," the  President noted. Armen Sarkissian became the first President of the  Republic of Armenia, elected not by popular vote, but according to  the new Constitution, by the Armenian Parliament in April 2018 for a  period of 7 years.

On January 24, NA Speaker Alen Simonyan announced that the President  of the Republic of Armenia submitted his resignation in accordance  with Article 142 of the Constitution, part 1 of Article 147 of the NA  Rules of Procedure. "According to the Rules of Procedure of the  National Assembly, if within a week after the resignation of the  relevant official withdraws his resignation letter, the Chairman of  the National Assembly makes a statement about it. And if he does not  withdraw the resignation letter, then a protocol is drawn up on the  termination of his powers, which is signed and published by the NA  Speaker. The resignation is considered accepted from the moment the  protocol is published," Simonyan said.

It should be noted that according to Article 125 of the country's  Constitution, the president submits a petition for his resignation to  the National Assembly. The resignation is considered accepted from  the moment of its promulgation in the manner prescribed by law. Until  the new head of state takes office, the Speaker of the parliament  performs his duties.