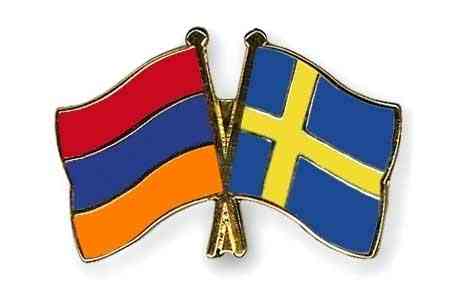 In this context, the Swedish diplomat highlighted Swedish-Armenian  partnership.

In his turn, Mr Matevosyan welcomed the positive dynamics of the  Armenian-Swedish relations and highly appreciated the Swedish  government's interest in assisting reforms in Armenia, as well as  Sweden's aid to Armenia during the 44-day war.

The sides stressed a need for expeditious handover of Armenian POWs  and other detainees being kept in Azerbaijan and were unanimous that  the Nagorno-Karabakh peace process must be resumed within the OSCE  Minsk Group.

The sides also discussed humanitarian problems caused by the 44-day  war, normalization of Armenian- Turkish relations, efforts to  establish a long-lasting and stability in the region.

In the context of Armenian-Swedish cooperation, Mr Matevosyan  highlighted the importance of presence if Swedish companies in  Armenia, particularly in road construction, as well as of intensified  bilateral cooperation in judicial reforms, corruption control and  human rights protection.