Committee to Protect Freedom of Expression: Cases of physical  violence against the media have tripled in 2021 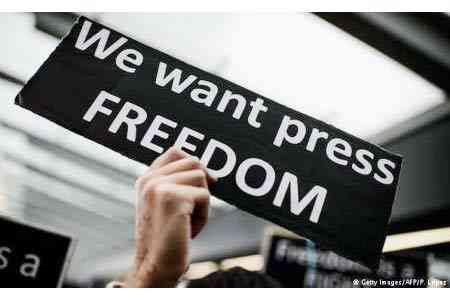 ArmInfo. 2021 has become a tense period for the Armenian media due to the deep socio-political crisis in post-war Armenia and the fierce struggle for early  parliamentary elections. This is stated in the official statement of  the Committee to Protect Freedom of Expression.

It is reported that in 2021 there were numerous cases of pressure and  restrictions against journalists, including with the use of legal  mechanisms. In particular, the beginning of the work of the National  Assembly of the 8th convocation was accompanied by severe  restrictions on the movement of media representatives in parliament.

The Committee to Protect Freedom of Expression reports that during  the reporting period, a total of 18 cases of physical violence were  recorded (against 6 in 2020) in relation to the media, as a result of  which 20 journalists and cameramen suffered (versus 11 in 2020), the  number of various pressures exerted on the media reached 107 (instead  of 177 last year).  With regard to new lawsuits against journalists  and the media on the basis of libel and insult, it is noted that 60  new cases have been registered this year. "This trend is of  particular concern against the backdrop of legislative changes  initiated by the authorities," the report says. Thus, on March 24,  the National Assembly adopted Alen Simonyan's bill, according to  which, in accordance with Article 1087.1 of the RA Civil Code, the  maximum amount of monetary compensation for insult and slander has  tripled. And on August 30, the law "On Amendments to the RA Criminal  Code" came into force, which criminalized the so-called "serious  insult".

The situation is also not satisfactory in terms of ensuring the right  to receive and disseminate information.  During the year, 99  violations were recorded (against 90 last year).

In this regard, in the opinion of the Committee, the decision of the  Government of the Republic of Armenia of December 9, according to  which it is envisaged not to publish information on official visits,  flights and related expenses on the govtravel.am website, is also of  concern.  Moreover, another project is under discussion, according to  which it is proposed not to disclose business trips of officials and  other data on the e-gov.am website.