Political scientist: The tense international situation around Ukraine  allows Armenia to gain time for the process of clarifying its borders  with Azerbaijan 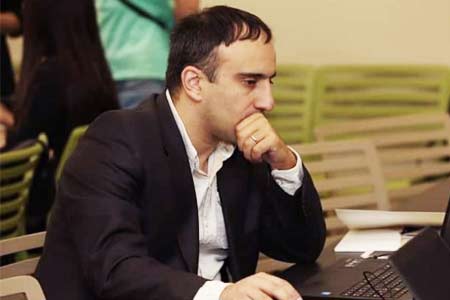 ArmInfo. The current rather tense international situation around Ukraine allows Armenia to postpone the process of delimitation and demarcation of borders with  Azerbaijan, at least until a more favorable situation is formed for  itself. Political scientist Robert Ghevondyan expressed a similar  opinion to ArmInfo.

"I don't think at all that this process today proceeds from our  interests and is of great importance for Armenia. And first of all,  this process must be dragged out as far as possible due to the lack  of direct opportunities at Armenia's disposal to force Azerbaijan to  take into account our own interests. And, of course, with same  purpose to put pressure on the international community in this  matter," he remarked.

In this light, Ghevondyan stressed the need for an early rearmament  of the Armed Forces in order to restore the military, respectively,  political balance with Azerbaijan. In his opinion, an important  direction of this process is the establishment and strengthening of  the existing international partnership of Armenia with various  centers of power in this area. The political scientist is convinced  of the need for purposeful work of Armenian diplomacy in this  direction, as international pressure is also a means of appeasing the  overly belligerent Azerbaijani leadership in recent times.

Commenting on the package of proposals submitted by Yerevan to Baku  on de-escalation of the situation in the border zone through an equal  withdrawal of troops and the establishment of additional security  mechanisms, he assessed this precondition as understandable and  normal. First of all, due to the conformity with international  practice of the situation in which negotiations between the  conflicting parties should not be accompanied by shots and killings  on the border.

According to the political scientist, the solution to the problem is  in the formation by Yerevan of means to force Baku to take into  account and respect the Armenian position. However, in his opinion,  in the absence of such measures at the disposal of the Armenian  leadership, the process of clarifying the borders should be delayed  as much as possible.

"I would like to note that the current geopolitical situation around  Ukraine also has the other side of the coin for us. In all  likelihood, Baku will try to use the problems between the Russian  Federation and the West and further increase the level of escalation  on the border by forcing yet another provocation. But in any case,  even reaching an agreement on the issue of clarifying the borders  will not lead to Azerbaijan's renunciation of armed provocations and  killings on the border. They will continue, since on the basis of  many years of experience, Aliyev realizes that in this way he can  influence public opinion in Armenia and, accordingly, the policy of  Yerevan,"  summed up Ghevondyan.