Vardan Toghanyan, who is completing his mission as Ambassador of  Armenia to Russia, made appeal 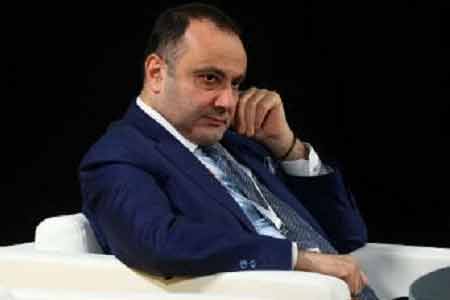 ArmInfo. Vardan Toghanyan, who is completing his mission as the Ambassador of the Republic of Armenia to the Russian Federation, made an appeal.

As Toghanyan noted, it is a great honor for him to represent the  Republic of Armenia for almost five years in allied Russia, which is  associated with centuries-old traditions, spiritual closeness, strong  fraternal ties and a history of common achievements. "During this  period, together with you, we have gone through numerous trials, the  most difficult stages of our modern history. Despite the  difficulties, together with the staff of the Embassy and  representatives of various state bodies of the Republic of Armenia,  in our activities we continued to adhere to the principles of  openness and constructive cooperation in order to promote the  development of a multifaceted potential of our relations and  strengthening friendly ties between our peoples," he said.

The diplomat expressed sincere gratitude to the representatives of  all state bodies of Russia for their daily painstaking work, mutual  respect and open dialogue, to his colleagues representing foreign  states in the Russian Federation, to numerous partners, various  organizations, educational, educational and cultural institutions and  the media for joint work and support our initiatives. "I am sincerely  grateful to the Armenian community of Russia, in particular, to the  Union of Armenians of Russia, individual community bodies, regional  associations, initiative groups and professional communities,  activists and philanthropists, who throughout the entire period  continued to closely cooperate with us and make efforts to solve the  problems we have tasks ahead of us. Separately, I want to express my  gratitude to the Russian and New Nakhichevan diocese of the Armenian  Apostolic Church, headed by Archbishop Yezras Nersisyan. I am sure  that our spiritual heritage is the main guarantor of the preservation  of our identity and the prosperity of the Armenian state," the appeal  says.  According to the diplomat, on his last day as the head of the  diplomatic mission, he decided to make a pilgrimage to one of the  monasteries in Russia, where rare materials and testimonies related  to the history of the Armenian people, their spiritual wealth and  heritage are stored.

According to the diplomat, on his last day as the head of the  diplomatic mission, he decided to make a pilgrimage to one of the  monasteries in Russia, where rare materials and testimonies related  to the history of the Armenian people, their spiritual wealth and  heritage are stored.  Earlier, on January 19, Minister of Foreign  Affairs of the Russian Federation Sergey Lavrov presented the Order  of Friendship to the Ambassador Extraordinary and Plenipotentiary of  the Republic of Armenia to the Russian Federation Vardan Toghanyan.  Toghanyan was awarded the Order of Friendship by a decree of the  President of the Russian Federation (dated December 20, 2021). The  state award was givenfor a great contribution to the strengthening of  Russian-Armenian allied relations.

On January 5, 2022, by the decree of President Armen Sarkissian,  Ambassador Toganyan was recalled from the post of head of the  diplomatic mission in Russia. As the Armenian media noted, RA Prime  Minister Nikol Pashinyan was dissatisfied with the work of the  ambassador, who headed the Armenian diplomatic mission in Russia even  before the Velvet Revolution. Vagharshak Harutyunyan, who left the  post of Minister of Defense of Armenia on July 20, 2021, was  appointed the new Ambassador of the Republic of Armenia to the  Russian Federation.

In 1999-2000 Vagharshak Harutyunyan served as Minister of Defense.  Then he engaged in political activities. In 2002, he was demoted by  then President Robert Kocharyan and stripped of his rank of  lieutenant general. In 2019, by the decree of President Armen  Sarkissian, he was reinstated in the rank. In August 2020, he was  appointed chief adviser to Prime Minister Nikol Pashinyan, and at the  end of November of the same year, he was appointed head of the  defense department.