Azerbaijan for launching border delimitation process without any  preconditions - FM 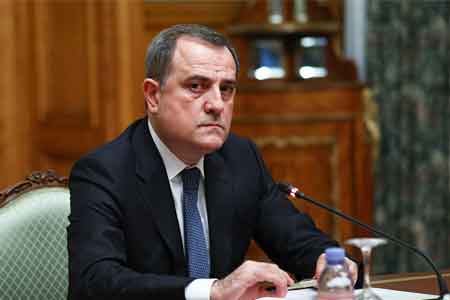 ArmInfo.Azerbaijan is for launching a border delimitation process without any preconditions, and border delimitation is viewed as an important element of  normalization of relations between the two states, Azerbaijani FM  Jeyhun Bayramov stated at his meeting with OSCE Secretary General  Helga Maria Schmid in Vienna.

Baku is for launching the process without wasting time. This is Mr  Bayramov's response to his Armenian counterpart Ararat Mirzoyan, who  stated that Armenia, through Russia's mediation, offered Azerbaijan a  package aimed at de-escalating the border situation. "We prepared a  package and handed it over to Russia and, through Russia's mediation,  to Azerbaijan. The package is aimed at de-escalating the situation on  the border," the Armenian FM said.

The Azerbaijani FM called "unacceptable the fact of Yerevan setting a  number of preconditions for launching the border delimitation  process."

Mr Bayramov also highlighted the importance of Azerbaijan's  cooperation with the OSCE, singled out the ongoing OSCE projects of  transport communication development, encouragement of "green energy,"  and environmental protection. The minister also pointed out  Azerbaijan's interest in OSCE's involvement in the construction and  integration processes in the current post-conflict period.