Ukraine is in line: Ankara continues its attempts to get into already  established international mediation formats 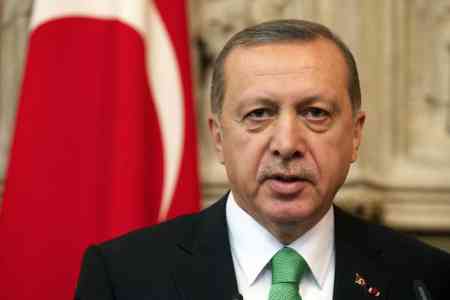 ArmInfo. Ankara continues to try to get into the already established international mediation formats. After the South Caucasus, the Erdogan regime is now focused  on Ukraine.

So, according to Anadolu, Turkish leader Recep Tayyip  Erdogan invited Russian President Vladimir Putin and Ukrainian  President Volodymyr  Zelenskyy to Turkey to discuss and resolve  differences.  This was announced by press secretary of the  Presidential Administration of Turkey, Ibrahim Kalin, during a panel  discussion on the topic "Possible impact of tension between Russia  and Ukraine on Europe and NATO", organized online by the Circle  Foundation analytical center.

Kalin said that Ankara is ready to play any possible role to "reduce  tension between Moscow and Kyiv  ", stressing that "the consequences  of Russia's military operation against Ukraine will be great and  irreversible." Although Moscow has repeatedly stated that it does not  intend to interfere in the events in Ukraine.

He also added that there are no quick fixes for such long-term  geopolitical problems.

"[Erdogan] even invited them [the presidents of the Russian  Federation and Ukraine] to come to Turkey and hold a meeting here to  resolve problems and disagreements. Turkey is ready to play any  possible role to reduce tensions between Russia and Ukraine. We do  this both as a friend of Russia and Ukraine, and as an ally in NATO",  said the press secretary of the Turkish leader, Anadolu reports.

He also informed that Erdogan will visit Ukraine in the coming weeks,  where he will meet with President Zelenskyy. "At the same time, we  will be in close contact with Moscow in order to avoid any military  actions that have large and irreversible consequences," Kalin  emphasized.

It is noteworthy that a working visit of the President of Azerbaijan  to Kyiv  took place a few days ago. As a result of the visit, 6  documents were signed. According to experts, this visit was also  aimed at "reconnaissance of the soil" against the backdrop of reports  of possible escalations on the Ukrainian border.

To resolve the situation in eastern Ukraine, the Normandy Four  (Normandy Format) was created, which includes a group of leaders of  four countries (Germany, Russia, Ukraine and France).