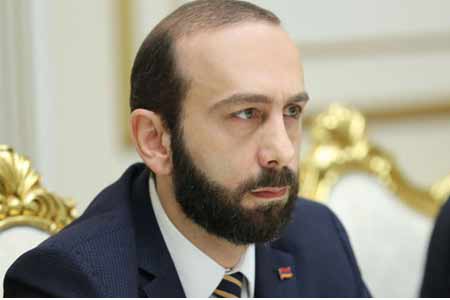 ArmInfo.Yerevan prepared proposals aimed at de-escalating the situation on the  Armenian-Azerbaijani border, and passed them both to Russia and  through Moscow to Azerbaijan. Minister of Foreign Affairs of Armenia  Ararat Mirzoyan stated this on January 19 during the Government Hour  in Parliament

On January 14, Russian Foreign Minister Sergei Lavrov, at a press  conference following the results of the activities of Russian  diplomacy in 2021, said that Russia would convey to Azerbaijan  Armenia's proposals regarding a commission on the delimitation of the  border between the two countries with its subsequent demarcation.  "Just yesterday, I talked with an Armenian colleague who had new  proposals, we are passing them on to Baku. We will look at how to  make it (the commission) work as soon as possible," he said. "It is  optimal to form this commission by including issues on its agenda  that need to be addressed as a matter of priority," Lavrov added. As  the head of the Russian Foreign Ministry noted, Baku and Yerevan are  making their proposals regarding the formation of a commission, but  disagreements on this issue remain. "In order to form a commission,  it is necessary, first of all, to agree on the conditions. These  conditions are now being discussed. There are differences," the  minister continued. Our position is simple: we need to sit and,  within the framework of an officially established commission, resolve  all those issues that currently remain unresolved."

According to Mirzoyan, the Armenian side has prepared a package of  measures aimed at de-escalating the situation on the  Armenian-Azerbaijani border, reducing tension, increasing security  and stability, and handed it over to the Russian side, and through  Moscow also to Azerbaijan. "Now we are waiting for an answer,"  Mirzoyan said.

"Of course, I can't publish the details. In reality, there is no  point in this. I can only say that they come from the issues  constantly raised by the Prime Minister of the mirror withdrawal of  troops and the creation of additional security mechanisms - our  general concept, voiced earlier," Mirzoyan said. He added that this  package was presented to the Security Council.