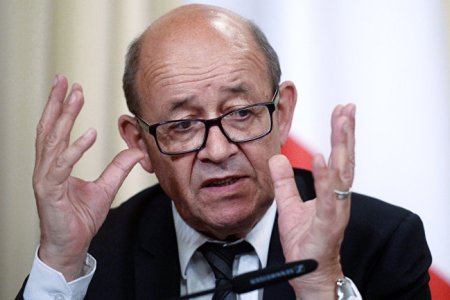 On the other hand, it expects French MPs and officials to inform the  country's authorities of their trips beforehand, French FM Jean-Yves  Le Drian stated in Parliament.

President Aliyev's remarks concern an elective officer and a French  presidential candidate and are unacceptable in form and in essence,  Mr Jean-Yves Le Drian said. He added that he informed the Azerbaijani  ambassador of it, TASS reports.

The minister reminded the MPs that both they and other officials  inform the foreign office of their trips irrespective of the goals.

She claimed the Azerbaijani president's threats addressed to the  French presidential candidate were grounded.

In January 12 interview with Azerbaijani media, President Aliyev was  critical of Ms Pecresse. If Azerbaijan had been informed of her  illegal visit to Nagorno-Karabakh, she would not have been allowed to  leave the country, he said.

In her turn, Ms Pecresse was critical of the French government over  being silent.  "A government that does not protect its presidential  candidate who made a trip to a remote part of the world and was  attacked - it is a row," she said.

According to Le Journal du Dimanche, in a letter signed by the  majority of LR deputies, senators and MEPs (a little less than 250  political figures), they call on Macron, to demand on behalf of  France, that Azerbaijani President Ilham Aliyev apologize to French   presidential candidate from the Republicans party

Valerie Pecresse for scandalous remarks about a French politician.

"Should we tolerate the government of any other state forbidding  representatives elected by the French people to visit the territory,  which, we recall, does not belong to this state, or would threaten to   encroach on their freedom, up to their physical safety", the letter   of the legislators reads.

In this vein, the MPs reminded Aliyev that the French are free, and  France is a sovereign state.  "France cannot accept any threat, must  not succumb to any intimidation, especially when they are made by a  despot, who calls Armenians "dogs", who during the conflict with  Armenia used  prohibited weapons and jihadist mercenaries and  constantly  demonstrated how little he values human dignity.

"Therefore, Mr. President, we ask on behalf of France to demand that   the Republic of Azerbaijan officially ask for forgiveness, and if   this does not happen as soon as possible, we demand that the French  ambassador be recalled from Azerbaijan. This is a matter of both  France's values and its honor. This is also about the support that we  owe to the Armenian people, who, despite the aggression, provocations  and humiliation of Azerbaijan, are firmly and worthily going through  trials. The position of France should be equal to the example of  Armenia, which worthily passes through the crucible of suffering,  which causes admiration", the letter notes.

"France can not leave these scandalous statements unanswered, since  this statement is not only a call to hatred against the French  statesman, the president of the Ile-de-France region and the  candidate for the presidency of France, but also an undisguised   threat directed to the French people, the government of France and   its representatives, taking into account the relations of our country   with Armenia.