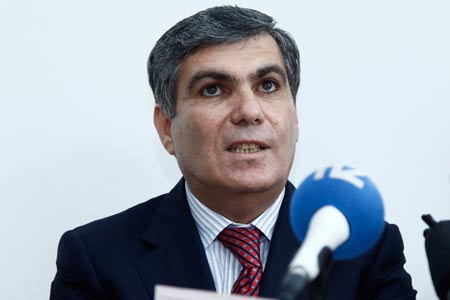 ArmInfo.Well-thought-out and efficient work to strengthen Armenia's economy will, in the course of time, enable the country to have Artsakh achieve not only special  status, but also independence, Chairman of the Republic party Aram  Sargsyan told ArmInfo.

"For me Artsakh has always had special status. And it will be so as  long as Armenians live there. Everyone, and we first of all, must  realize that deportation and genocide - a recurrence of the 1915  events - is the only alternative to Artsakh's special status. It  appears impossible in the situation Azerbaijan and Turkey have found  themselves in now, as they will both have severe international  sanctions imposed on them," he said.  Another factor of no small  importance that could facilitate deportation/genocide of the Artsakh  Armenians is ousting Russia from the South Caucasus. Primarily, in  view of the fact that the resolved Artsakh problem will deprive  Moscow of means of pressure on Baku and Yerevan.   According to Mr  Sargsyan, Azerbaijani President Ilham Aliyev, in the presence of  French President Emmanuel Macron and President of the European  Council Charles Michel, has to conduct negotiations over one subject,  whereas he presents an entirely different situation in Baku.

Both Ilham Aliyev and all the others are perfectly aware that no  Armenian authorities will ever recognize Azerbaijan's territorial  integrity or state Artsakh is not Armenia any longer. And the  Azerbaijani president will never get what he wants by means of either  militant rhetoric or even practical steps to invade new territories  in Armenia. And he will never achieve his goals if any military  aggression will be repelled by the Armenian armed forces.

"The 'nation-army' and 'all for army' concepts must dominate  everywhere, including the minds of all our opposition members. Each  of the three ex-presidents of Armenia has contributed to army  construction and each of us must spare no effort to strengthen our  Armed Forces regardless of who is Armenia's leader now.  A  well-organized and equipped army is a guarantee against Azerbaijan's  aggression. No alternative to that.  Because without massive  retaliation for causing damage to us, Aliyev will continue escalating  the situation on the border to influence both the negotiations over  Artsakh and the domestic situation in Armenia. So our only path is  strengthening our economy and army," Mr Sargsyan said.