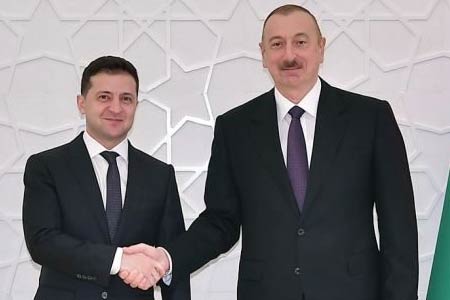 ArmInfo.After the meeting in an expanded format in Kiev, the signing ceremony of the  Azerbaijani-Ukrainian documents was held with the participation of  Azerbaijani President Ilham Aliyev and Ukrainian President Vladimir  Zelensky. This was reported by the press service of the President of  Azerbaijan.

According to Azerbaijani media, the main topics of negotiations  between the leaders of the two countries were the sectors of  cooperation. The countries signed 6 bilateral documents.

President of Ukraine Volodymyr Zelensky noted that the meeting  discussed the prospects for new mutually beneficial infrastructure  and privatization projects. Another hot topic was the development of  transit traffic, as well as the aviation industry.

In turn, Ilham Aliyev stressed that Azerbaijan is ready to cooperate  with Ukraine in all areas. He thanked the Ukrainian leader for his  hospitality and also invited Volodymyr Zelensky to pay an official  visit to Baku.