Lavrov: The processes started in the 3+3 format are much more  significant because it discusses the prospects for the development of  the entire region 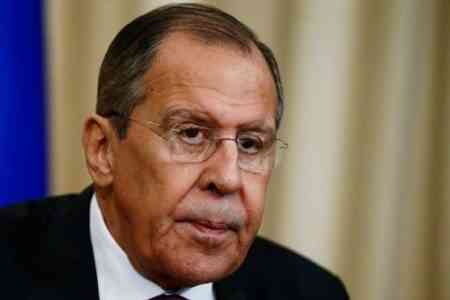 "We unconditionally support those efforts and actively participate  [in them]. They contribute to the normalization of the situation in  the South Caucasus and help to create conditions for the still  remaining political problems to be resolved much more actively, more  fruitfully, through, among other things, economic and other  cooperation between the three countries of the South Caucasus and  their three large neighbors - Russia, Turkey and Iran>, said the head  of Russian Foreign Ministry. In this vein, he recalled that the idea  of the 3 + 3 format, which was first proposed by the President of  Azerbaijan, and then by the leader of Turkey, was actively supported  by the Russian side.

"We immediately saw  a very good unifying potential in this idea and  from the first days of its discussion, and at the meeting held in  Moscow, we advocated the involvement of our Georgian neighbors in  this process, based on the fact that the more opportunities for  communication, the better the solution to the remaining problems,"   Lavrov added, recalling that Russia and Georgia are now communicating  within the framework of the Geneva discussions on the Transcaucasus,  where the consequences of Georgia's "aggression" after August 2008  are also discussed within the framework of an unofficial bilateral  platform that was created between Moscow and Tbilisi a long time ago.

Howerver, Lavrov continued, in his opinion the processes started in  the 3+3 format are much more significant, because the prospects for  the development of the entire region are discussed in this format.   "Now that peace agreements have been reached after the hostilities of  2020, when, with the assistance of the President of Russia, the  leaders of Armenia and Azerbaijan signed agreements (trilateral  statement, ed.  note) on the completion of hostile actions, and on  the development of trade and economic ties, the unblocking of all  routes in the region. Of course, this opens up opportunities in which  Russia, Iran, Turkey, and I am sure Georgia as well, are interested.  It seems to me that it is in their interests to join this format  without preconditions", he said, adding that it is possible to agree  on discussing in this format only topics of interest to all  participants.

At the same time, Lavrov drew attention to the fact that due to the  lack of diplomatic relations with Georgia, interrupted at the  initiative of the Georgian side, Moscow has fewer opportunities to  explain to Tbilisi the advantages of this platform. The head of the  Russian Foreign Ministry noted that Moscow turned to Turkish and  Azerbaijani partners with a request to explain to their Georgian  neighbors the advantages of this format. "Such a connection will not  oblige them to anything - this concerns their political positions,"  summed up Lavrov.

It should be noted that on December 10, the first meeting of the 3+3  consultative regional platform was held in Moscow, co-chaired by the  Deputy Foreign Ministers of the Russian Federation, Azerbaijan,  Armenia, Turkey and the Director General of the Iranian Foreign  Ministry. The Russian Foreign Ministry noted that the Georgian  representatives, who were also invited, refused to attend the  meeting.