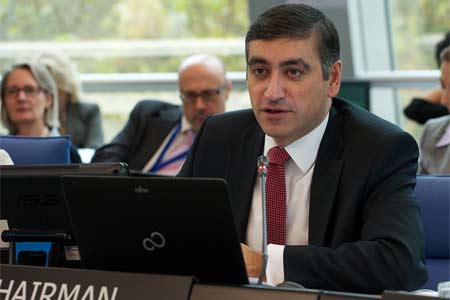 ArmInfo. Poland's Chairmanship of the OSCE in 2022 intends to promote and advance the rational, smart and flexible use of the OSCE's unique tools and  negotiation formats. "We need to reinvigorate the debate about  European security.

Let us start a process that will help us to uphold  the Helsinki principles in full conformity with international law,"  OSCE Chairman-in-Office, Minister of Foreign Affairs of Poland  Zbigniew Rau said in his address to the Permanent Council in Vienna,  January 13.

During an exchange of views, Head of Armenian Mission, Ambassador  Armen Papikyan spoke of the ongoing provocations by Azerbaijani  troops along the line of contact with Artsakh and along the Armenian-  Azerbaijani border, which resulted in casualties. He particularly  focused on the provocation by Azerbaijani troops using artillery and  drones on January 11, in Armenia's sovereign territory, which they  occupied on May 12, 2021, after an incursion.

The provocation claimed the lives of three Armenian soldiers - Artur  Mkhitaryan, Rudik Gharibyan and Vahan Babayan. The Armenian diplomat  stressed that Baku's anti-Armenian statements and "revelations"  confirm the border clashes were provoked by Azerbaijan. Ambassador  Armen Papikyan drew Mr Rau's attention to the plight of the Armenian  POWs in Azerbaijan as well as to the problem of violent  disappearances, which has not so far been solved because of  violations of the trilateral statement of November 9, 2020, and of  commitments under international humanitarian law. Mr Papikyan urged  the OSCE Chairman-in-Office and the OSCE Co-Chairs to take effective  measures to put an end to Azerbaijan's provocations and revitalize  the peace process. He stressed that use of force in the OSCE region  cannot settle any conflict, and Azerbaijan using force as a  legitimate instrument for settling the conflict poses a threat to  security in the OSCE region, discrediting international organizations  dealing with conflicts.

Mr Papikyan urged the Polish OSCE Chairman-in-Office to focus on the  Nagorno-Karabakh conflict and expressed hope that Poland's  chairmanship, in contact with the other international partners, will  use effective instruments to send a clear signal to Azerbaijan that  further use of force is unacceptable and entails consequences.

"Azerbaijan must put an immediate end to its provocations, withdraw  its forces from Armenia's sovereign territory and de-escalate the  tension both on its border with Armenia and along the line of contact  with Artsakh, and honor its commitments," Mr Papikyan said.