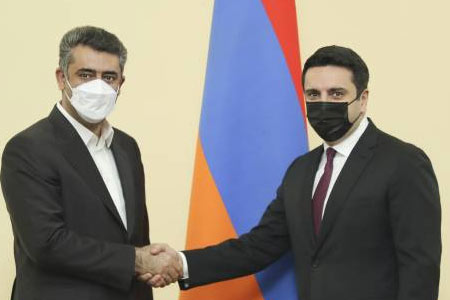 ArmInfo.Chair of the RA NA Standing Committee on Defense and Security Andranik Kocharyan, the Committee members Gurgen Melkonyan, Vilen Gabrielyan, Armen  Khachatryan and Vahagn Aleksanyan yesterday met with the members of  the Iran-Armenia Parliamentary Friendship Group of the Majlis of the  Islamic Republic of Iran, who had arrived in Armenia.

As the press service of the RA NA reports, the Head of the  Armenia-Iran Friendship Group Gevorg Papoyan also took part in the  meeting.

Andranik Kocharyan evaluated positive the centuries-old relations,  noting that the Armenian people had felt that fraternity and  friendship for many years, being able to overcome the difficulties.  The sides have highlighted the strengthening of the inter-  parliamentary ties, stating that there is unused potential of  cooperation in numerous spheres.

At the meeting issues on ensuring the security and stability of the  region, the preservation of the ceasefire regime, the de-blockading  of the roads and the post-war situation were discussed. In ensuring  the regional security, the interlocutors emphasized the combining of  the efforts and the deepening of cooperation. The importance of  reaching long lasting peace in the region was underlined.

The Iranian considered unacceptable and condemnable the encroachments  towards the sovereign territory of Armenia by Azerbaijan. "Any change  of Armenia's borders is inadmissible for us," the guests underscored,  adding that the interests of the two countries in the geopolitical  field are consonant.