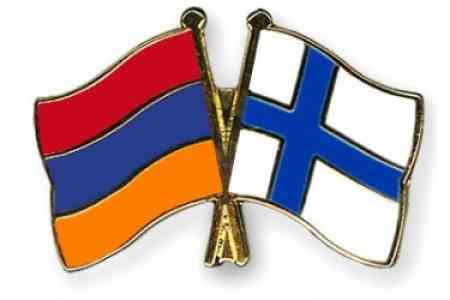 ArmInfo. On December 6, political consultations between the Foreign Ministries of the  Republic of Armenia and the Republic of Finland took place in Yerevan  co-chaired by Tigran Samvelian, the Head of European Department of  the Ministry of Foreign Affairs and Marja Livala, Director General of  the Department of Russia, Eastern Europe and Central Asia of the  Foreign Ministry of Finland.

As the press service of the RA MFA reports, the parties discussed a  wide range of issues of mutual interest, emphasizing the importance  of holding political consultations and regular high-level visits.

The delegations of the two countries also touched upon the issues  related to the development of trade and economic cooperation,  exchanged views on the promotion of cooperation in different fields.

Within the framework of the visit to Yerevan, the Finnish delegation  met Deputy Foreign Minister Paruyr Hovhannisyan. During the meeting,  the parties touched upon Armenia- EU cooperation, issues related to  the EU Eastern Partnership Summit to be held in Brussels in December.

Upon the request of the Finnish side, the Deputy Foreign Minister  provided details on the current situation in and around  Nagorno-Karabakh. In this context, the importance of a full  resumption of the NK peace process under the auspices of the OSCE  Minsk Group Co-Chairmanship was highlighted. As a member of the OSCE  Minsk Group, the Finnish side reaffirmed its unconditional support  for this mandate.

Within the framework of the visit, the Finnish delegation met Vahe  Gevorgyan, Deputy Foreign Minister. The parties discussed the  Armenian-Finnish effective cooperation within the international  multilateral frameworks.

At the end of the visit, the Finnish delegation laid a wreath at the  Genocide Memorial.