Jonathan Lacote: Many of us hope that Missak Manouchian`s ashes will  be transferred to the Pantheon 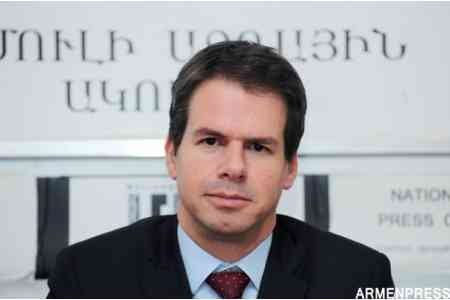 ArmInfo.Many of us hope that Missak Manouchian's ashes will be transferred to the Pantheon. Former French Ambassador to Armenia Jonathan Lacote wrote about this  on his Facebook page.

Lacote recalled that a survivor of the Armenian Genocide, a refugee,  a member of the French Resistance Movement (the international  "Communist Partisan Fighting Detachment of Immigrant Workers") was  shot together with his 22 comrades on February 21, 1944 at Fort Mont  Valerien near Paris.

"Thus, through Missak Manouchian, a tribute will be paid to all  foreigners, including those like him without citizenship, who joined  the ranks of the French Resistance and gave their lives for France,"  the former French ambassador to Armenia wrote.

The diplomat also recalled that in 2015, on the occasion of the 70th  anniversary of the end of World War II and the victory over Nazism,  by the decision of then French President Francois Hollande, the ashes  of four heroes of the French Resistance were transferred to the  Pantheon. Since then, the names of Jean Moulin, Germaine Tillion,  Genevieve de Gaulle-Anthonioz and Josephine Baker have been added to  the list of 70 names on the walls of the main tomb of the Republic.  Like other presidents of the Fifth Republic (with the exception of  Georges Pompidou and Valerie Giscard d'Estaing), Francois Hollande  decided to use the prerogative of the head of state - to choose  historical figures to perpetuate their memory in the Pantheon.

Missak Manouchian was born in 1906 in the city of Adiyaman. During  the 1915 Genocide, his father was killed, his mother died of hunger.  Misak and his brother moved to Syria on foot, where they ended up in  an orphanage. In 1925 he moved to France, where he became interested  in communist ideas. In 1934 he joined the French Communist Party.  From the first days of the war, he joined the struggle against  fascism, organizing, together with a French doctor, an underground  organization. He was arrested, escaped from the camp, joined the  "Stalingrad" detachment. In August 1943, he assembled the  international "Communist Partisan Fighting Detachment of Immigrant  Workers", which entered the French Resistance movement.  The group of  50 included Spaniards, Poles, Italians, Hungarians, Jews and two  Armenians. Among his associates was his wife Meline, who coordinated  the communication between the underground branches of the Communist  Party. The detachment carried out about thirty actions against the  German invaders.

In November 1943, the police arrested 23 members of the anti-fascist  resistance and its leader. After three months of torture, on February  21, 1944, they were shot at Fort Mont Valerien near Paris. The  shooting of the patriots angered the French. In France, Manouchian  and his comrades have become symbols of the struggle for freedom. In  1946, at the initiative of Charles de Gaulle, the Fighting France  Memorial was opened at Fort Mont-Valerien. Missak Manouchian was  posthumously awarded the Order of the Legion of Honor. Streets and  squares in Paris, Valence, Marseille, Yerevan are named after him.