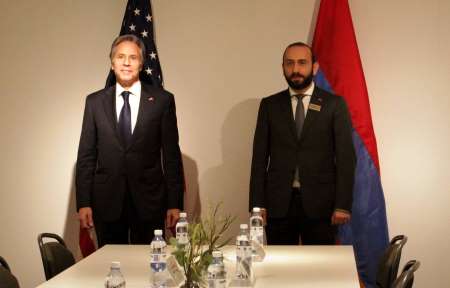 ArmInfo.On December 2, Foreign Minister of Armenia Ararat Mirzoyan, who is in Stockholm on a working visit, met with Antony Blinken, the U.S. Secretary of State, reports  the press service of Armenia`s foreign office.

The interlocutors commended the level and the development dynamics of  the political dialogue between Armenia and the United States.

Ararat Mirzoyan highly appreciated the US support to democratic  development, capacity building of state structures, the rule of law  and the fight against corruption in Armenia. Antony Blinken expressed  the full support of the U.S. side for the process of democratic  reforms in Armenia.

Ararat Mirzoyan highly appreciated the resolute position of the  United States regarding the issue of recognizing the Armenian  Genocide. In this context, referring to President Joe Biden's this  year's statement on the recognition of the Armenian Genocide, the  Foreign Minister underscored that, therefore, the United States  reiterated its commitment to the protection of human rights, the  values and principles of humanity.

The sides also discussed issues related to international and regional  security and stability. In this context, Ararat Mirzoyan briefed the  U.S. Secretary of State on the situation resulting from the  infiltration of the Azerbaijani armed forces into the sovereign  territory of the Republic of Armenia and the recent aggression  against the territorial integrity of Armenia. In this regard, the  interlocutors highlighted the importance of implementing steps  towards the de-escalation of the situation.

At the meeting, the sides had a detailed discussion on the  Nagorno-Karabakh conflict. In the context of urgent humanitarian  issues resulting from the 44-day war unleashed by Azerbaijan against  Artsakh, the imperative of repatriating Armenian prisoners of war,  hostages and other detainees was stressed.  Foreign Minister Mirzoyan  and Secretary of State Blinken emphasized the need for a resumption  of the peace process aimed at comprehensive and lasting settlement of  the Nagorno-Karabakh conflict under the mandate of the OSCE Minsk  Group Co-Chairmanship. The role of the United States as a Co-Chair  country was also highlighted.