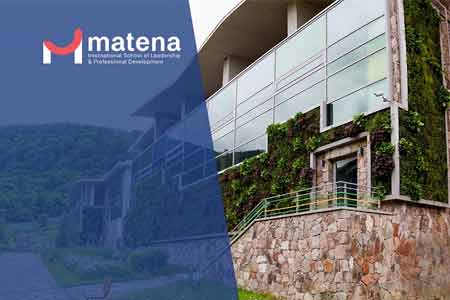 ArmInfo.A unique partnership project is being  launched in Armenia - Matena International School of Leadership and  Professional Development. Matena's mission is to contribute to the  development of professional and leadership skills through collecting  and sharing advanced knowledge and the leading world practices for  those who permanently seek improvement and excellence in their  professional fields, reads a message on Russian-Armenian businessman  Ruben Vardanyan`s private page.

Together with its partners - Moscow School of Management SKOLKOVO and  a number of international institutes - the new center will deliver  education programs designed for middle and high-level executives in  the government and private sectors as well as for businessmen.

The International Advisory Board and International Academic Board of  the school comprise reputable representatives of academic and  business communities, famous social and political actors, including  Hovhannes Avoyan, the co-founder and CEO of "Picsart", Marta Albert,  managing principal of "QG Family Office", and others.

The first program will be launched in the first half of 2022. Among  the prospective students are both citizens of Armenia and diasporic  Armenians, as well as students from the countries of the Eurasian  Economic Union.

Matena will offer courses for heads of local government bodies, as  well as special courses for women. The courses will be in three  languages, Armenian, Russian and English. Students will pay for the  courses, but a grant program will be offered to a larger number of  participants.

"Matena" will also contribute to the 15 strategic goals of the  "Future Armenian" public initiative, in particular, to the  implementation of "Education excellence: prioritize education as the  highest societal value for Armenians worldwide".