Azerbaijani side opens fire at positions in Karmir Shuka community 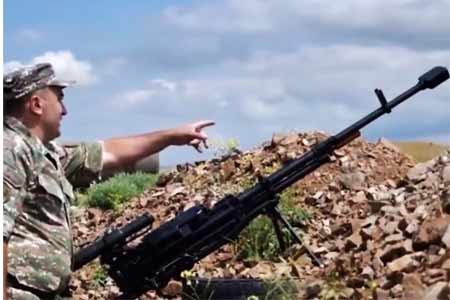 ArmInfo.On December 2, at around 10:30 am, the Azerbaijani side fired from the positions located in the direction of Karmir Shuka community of Martuni region  of the Artsakh Republic, which lasted for about 10-15 minutes. Mainly  firearms were used, Artsakh Human Rights Ombudsman Gegham Stepanyan  reported.

According to the explanations received, the shots were heard in the  residential part of the community, and the bullets passed through the  gardens of the residents. No cases of human or material damage were  reported as a result of the shootings.

The Azerbaijani side, violating the ceasefire established by the  Trilateral declaration, the agreements reached at a high level,  continues its criminal actions against the rights of the people of  Artsakh, violating first of all the right to life of the civilian  population, psychological and physical inviolability.  After the  establishment of the ceasefire, we have repeatedly stated that with  such criminal actions the Azerbaijani side seeks to intimidate the  people living in Artsakh, to achieve the eviction of Armenians from  Artsakh by creating an atmosphere of fear and despair.

In order to curb the criminal actions of the Azerbaijani side, to  exclude their recurrence, as well as to protect the security of the  inhabitants, the immediate removal of the Azerbaijani armed positions  from the neighborhood of the peaceful settlements of Artsakh, the  introduction of impartial investigation mechanisms of ceasefire  violations is an urgent need.