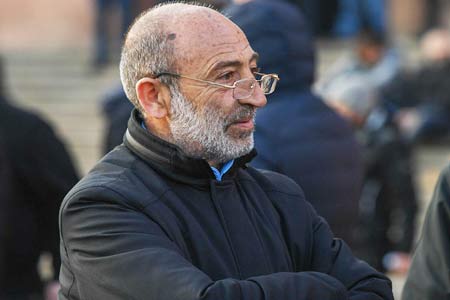 ArmInfo. Commander of the "Sisakan" volunteer detachment, Ashot Minasyan, was arrested. He is accused of plotting to assassinate the Prime Minister. Lawyer Mihran  Poghosyan announced this on his Facebook page.

According to him, the judge of the Court of Appeal, Tigran Simonyan,  granted the investigator's petition of November 15, 2020, "thereby  recognizing that it is not the facts that are important for the  arrest, but the wishes of the authorities." As the lawyer pointed  out, the second stage of the operation "Decapitation of Syunik" is  underway.

On November 14, 2020, the National Security Service of Armenia  announced the suppression of the attempt to assassinate Armenian  Prime Minister Nikol Pashinyan. The service revealed that a group of  citizens illegally acquired and stored weapons, ammunition and  explosives to seize power in Armenia.  According to the service, the  attackers, who did not agree with the domestic and foreign policy of  the state, intended to seize power by killing the head of government.  Minasyan was arrested on suspicion of committing crimes under  Articles 35-300 (Usurpation of Power - ed. note), 35-305 (Preparing a  murder in order to stop the activities of a state, political or  public figure - ed. note) and 235 (Possession of illegal weapons,  ammunition - ed. note) of the RA Criminal Code. As part of the case  on the preparation of the murder of Nikol Pashinyan, former director  of the National Security Service Artur Vanetsyan, former RPA MP  Vahram Baghdasaryan and member of the ARF "Dashnaktsutyun" Ashot  Avagyan were detained. All of them were released.

The court of first instance and the Court of Appeal saw no reason for  the detention of Minasyan, pointing out that there was no reasonable  suspicion of his involvement in the attempted murder. However, the  Prosecutor General's Office filed a cassation appeal against the  decision. The cassation court, in turn, considered that the lower  instances did not take into account several key circumstances of the  case, and sent the case for new consideration to the court of first  instance.