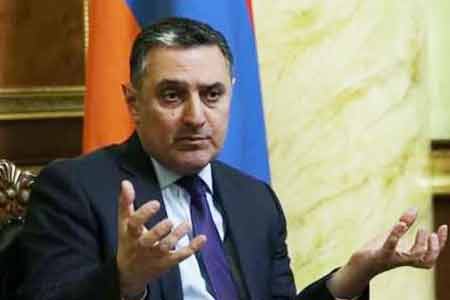 ArmInfo.Hrachya Tashchyan was relieved of his post as head of the Foreign Relations Department of the Office of the Prime Minister of Armenia.

The corresponding decision, according to the official website of the  government, was signed by Prime Minister Nikol Pashinyan on December  1. The reasons for this decision are not reported.  Hrachya Tashchyan  was appointed Head of the Foreign Relations Department of the Office  of the Prime Minister of the Republic of Armenia on July 9, 2020, for  a period of three years. Since November 1, 2018, Tashchyan has served  as Assistant to the Prime Minister. Previously, he was the head of  the department of multilateral policy and development cooperation of  the Armenian Foreign Ministry, the head of the NATO department, the  envoy of the Armenian Embassy in the United States, in 2009-2011 Head  of the Department for External Relations of the Government Office of  Armenia. Has the diplomatic rank of Ambassador Extraordinary and  Plenipotentiary Minister.

It is noteworthy that the dismissal followed an information leak  that, allegedly, Hrachya Tashchyan, together with former head of the  National Security Service, Artur Vanetsyan, provided an operational  connection between Pashinyan and Azerbaijani President Ilham Aliyev.   For example, former director of the National Security Service Artur  Vanetsyan on November 25, referring to the topic of confidential  negotiations with Azerbaijan, said that besides him, another official  provided operational communication with Azerbaijan in 2018-2019.   However, Artur Vanetsyan did not give the name of this person,  hinting that he was an employee of the prime minister's office. The  next day, the ANI Center for Armenian Studies stated that Hrachya  Tashchyan was the second official. "If Vanetsyan met with his  Azerbaijani counterpart, then Tashchyan communicated via WhatsApp  with one of the most loyal people to Ilham Aliyev - Hikmet Hajiyev,"  ANI reported.