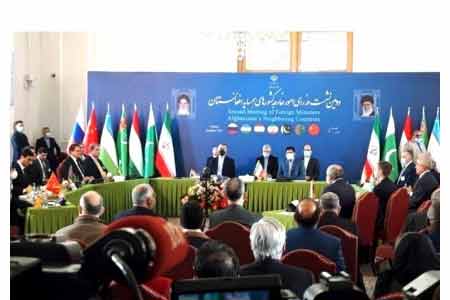 ArmInfo.On October 27, 2021, the second meeting of the Ministers of Foreign Affairs of neighboring countries of Afghanistan +Russia was held in Tehran, IRI.

The current dialogue was attended by the Ministers of Foreign Affairs of Uzbekistan, Pakistan, Tajikistan and Turkmenistan, as well as the representatives of Russia and China.

Turkmenistan was represented at the meeting by the Minister of Foreign Affairs R.Meredov.

The diplomats focused attention on the need of consolidation of efforts of the parties aimed at providing mutual assistance in the formation of inclusive government in Afghanistan in participation of all national groups of the country.

Among the priority issues of this meeting is the provision of well-being, stable development on Afghan soil and opportunities of integration of the country in large-scale economic, energy and transport-communications projects of regional significance.

Turkmenistan takes part on a regular basis in multilateral dialogues on Afghanistan. As President Gurbanguly Berdimuhamedov underlined in his speech during 76th session of the UN General Assembly, Turkmenistan, while developing relations with Afghanistan, always put as a basis principles of friendship and good-neighborliness as well as historical and cultural-civilizational community of the peoples of the two countries.

During current meeting, the Turkmen side once again underlined its readiness as neighboring and neutral state to assist to establish of corresponding dialogue and for creation of conditions of early establishment of peace, harmony and unity in Afghanistan.