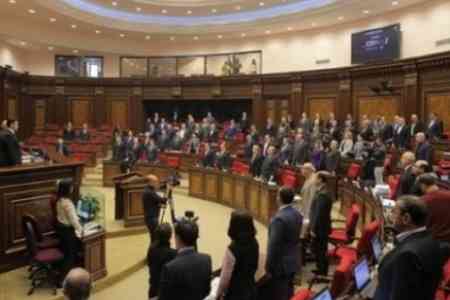 ArmInfo. The National Assembly of Armenia today in the first reading approved the bills submitted for discussion yesterday. Before the start of the next session, the  parliamentarians observed a minute of silence in memory of the  victims of the October 27 crime.

The parliament in the first reading approved the draft on amendments  and additions to the law "On Citizenship of the Republic of Armenia"  submitted by the government. As Deputy Chief of the RA Police Ara  Fidanyan stated yesterday, the project was developed to solve  practical problems arising during the implementation of the law, to  properly ensure the obligations assumed by the Convention on the  Reduction of Statelessness, as well as to simplify the administration  in resolving issues of citizenship.

In particular, it is proposed to extend the legal deadline for  applying for citizenship by Armenians permanently residing in the RA  and citizens of other republics of the former USSR until December 31,  2023. In addition, adult children of Armenian citizens are given the  right to obtain citizenship without permanent residence in the  country for three years and corresponding knowledge of the Armenian  language. For the first time, it is possible to obtain a passport of  an RA citizen at the Armenian embassies and consulates operating in  foreign countries. The relations related to the termination of the  citizenship of children, the procedure for initiating proceedings on  the termination of citizenship in the event of acquiring citizenship  on the basis of forged documents or data, as well as the provision on  the termination of citizenship have been clarified. The presidential  decree on the termination of RA citizenship comes into force from the  moment of submission of the corresponding document confirming the  fact of acquisition of the citizenship of another state by the person  to the Passport Service of the RA Police. The terms of consideration  of applications for obtaining citizenship are also changing - instead  of the current 6 months, by setting a period of 90 working days.

The parliamentarians also approved a draft amendment to the law "On  Holidays and Memorable Days", which is proposed to reduce the number  of non-working days established for the New Year and Christmas  holidays. Accordingly, for the celebration of the New Year and  Christmas holidays, it is proposed to establish non-working days from  December 31 to January 1 inclusively and January 6. As the initiator  of the bill, the Minister of Economy of Armenia Vahan Kerobyan said  yesterday, during 6-7 non-working days on New Year's holidays, people  are obsessed with gluttony. In addition, according to him, long  holidays negatively affect the rate of economic growth of the  country, and the extra four days of work will create an additional  volume of goods and services.

The idea was supported by the ruling Civil Contract faction,  considering it an objective necessity, while the parliamentary  opposition, on the contrary, opposed this legislative initiative.  According to the opposition factions, the initiator could not justify  the need to reduce non-working days during the New Year and Christmas  celebrations. The MPs  from the "Armenia" faction proposed to make  September 2 and September 7 also non-working.

To recall, 22 years ago - on October 27, 1999, a group of terrorists  led by Nairi Hunanyan burst into the meeting room of the National  Assembly and shot the leaders and members of parliament and the  government of the republic who were there.