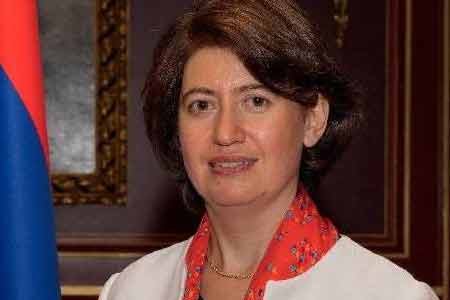 ArmInfo. The provision on the unblocking of regional infrastructure in the trilateral statement of November 9, 2020 is clear, without a double meaning.  Ambassador  of Armenia to France Hasmik Tolmajyan stated this in an interview to  "CONFLITS" edition.

At the same time, she added that within the framework of these  agreements, the Armenian side also guarantees the unhindered movement  of citizens, goods and vehicles between Azerbaijan and Nakhijevan.

"Neither the above-mentioned document, nor in any other document has  ever spoken and could not have been about providing any corridor  through the territory of Armenia. Therefore, Armenia resolutely  rejects the false agenda of the so-called" Zangezur Corridor "put  forward by Azerbaijan, as well as the provision of a corridor through  its territory at the expense of its own sovereignty.

And it is not surprising for us that the destructive steps of  Azerbaijan, in particular the announcement of a change in the borders  of the sovereign territory of Armenia, cause deep concern of the  regional players, including neighboring Iran," the Armenian  Ambassador noted.

The diplomat drew attention to the important role of Iran in reducing  tension in the region and establishing stability. According to her,  the last evidence of this was the clear position of Iran on the  inviolability of the borders of the Republic of Armenia.

"We are convinced that expanding Iran's involvement will only have a  positive impact in terms of promoting the peace agenda in the region  and creating a safe environment," Tolmajyan said.

At the same time, she drew attention to the fact that on May 12 of  this year, the Azerbaijani Armed Forces, once again ignoring the  fundamental international norms, invaded several kilometers deep into  the sovereign territory of Armenia in the Syunik and Gegharkunik  regions. She recalled that these actions of Azerbaijan were strongly  condemned by the international community.

"The French President also spoke on the situation and condemned this  act and called on Azerbaijani troops to leave the sovereign territory  of Armenia. However, we have to state that Azerbaijani troops are  still in some border areas of the sovereign territory of Armenia,  which is unacceptable. Armenia has taken a constructive position on  this issue, trying to find a peaceful solution to the problem through  negotiations through the mediation of its key strategic ally -  Russia," the Armenian diplomat said, expressing hope that Azerbaijan  "will take a constructive position in the current negotiations "and,  in order to avoid military confrontation, will withdraw its troops  from the sovereign territory of Armenia, returning to positions as of  May 11 this year, which will significantly reduce existing tensions,  creating favorable conditions for the start of the delimitation and  demarcation process. Answering the question about the likelihood of  new hostilities in the zone of the Nagorno-Karabakh conflict,  Tolmajyan stated that she would not like to make any predictions.  However, she drew attention to the fact that the situation in the  region remains very tense, even explosive.

"In the current situation, when the leadership of Azerbaijan, even  after last year's bloody war, rejects the peace agenda, without  abandoning its militant and expansionist policy, engendering hatred  of Armenians in its own society, it is difficult to talk about a  quick stabilization of the situation in the region. Armenia, in turn,  is taking all the necessary steps to advance the peace agenda in the  region," the Ambassador said, once again drawing attention to the  Armenian-hating policy pursued by the leadership of Azerbaijan inside  the country and on which a whole generation has already grown up. She  recalled that both Armenia and international human rights  institutions have been sounding the alarm on this issue for years.

"Today, manifestations of hatred are evident both in practically all  the speeches of the Azerbaijani leader and in the actions of the  Azerbaijani authorities. Suffice it to mention the documented cases  of illegal detention of Armenian prisoners of war in Baku for almost  a year, other detainees or the murder of Armenian prisoners of war  and civilians during the war. I think you will agree that one of the  most important ways to achieve peace in the region and avoid new wars  is a decisive rejection of hatred and hate speech, adherence to a  peaceful agenda, which we do not yet see from our neighbors," the  Ambassador summed up.