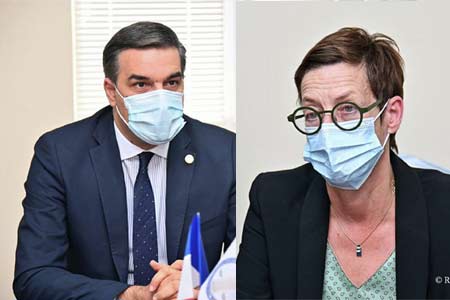 ArmInfo.During a meeting with newly appointed Ambassador of France to Armenia, Anne Louyot, RA Human Rights Defender (HRD) Arman Tatoyan, pointed to the established high cooperation with former Ambassador Jonathan Lacote, and  expressed confidence that it will be continued in the same spirit.

As reported by the office of the RA Ombudsman, the RA HRD highly  appreciated the professional and selfless work of French journalists  during the war (in the zone of the Nagorno-Karabakh conflict, Ed.   note) in September-November 2020.

During the meeting, Arman Tatoyan presented to the Ambassador the  facts confirming the violation of the rights of the residents of the  borderland of the Republic of Armenia by the armed forces of  Azerbaijan.

He noted that issues related to the state border of the Republic of  Armenia should be considered from the point of view of human rights  in order to prevent them from being pushed aside, limiting the  state's ability to protect these rights, and that human rights and  security should complement each other and not oppose each other.

The RA Human Rights Defender added that as a result of the criminal  actions of Azerbaijan, people were deprived of houses, lands and  meadows that belonged to them in Soviet times, as a result of which  not only social, but also serious security problems arose.

Arman Tatoyan stressed that delimitation and demarcation of the  border with Azerbaijan without creating a security zone, without  removing the Azerbaijani armed servicemen will not only fail to  ensure the rights of RA citizens and especially residents of the RA  border area, but will cause new violations of rights and new  tensions.

At the same time, he noted that the main reason and source of  violation by the Azerbaijani armed forces of the rights of the  civilian population of the Republic of Armenia is the policy of  hatred and enmity carried out by the Azerbaijani authorities, which  after the war reached an extreme level-to the fascism.

"In the context of such a policy, the security zone becomes even more  necessary. Moreover, this is reflected in an international document -  the PACE resolution of September 27, 2021," he said.  The RA Human  Rights Defender also stressed that all the servicemen of the Armenian  side and civilians illegally detained in Azerbaijan have the status  of prisoners of war and must be immediately released, returned to  their homeland without any political or other preconditions. Instead,  he said, the Azerbaijani authorities are artificially delaying and  politicizing this process, grossly violating the rights of prisoners  1and their families, causing them suffering and causing tension in  society.

At the meeting, the parties reached agreements on expanding the  sectors of joint activity.