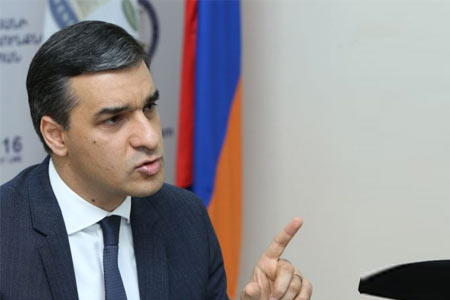 ArmInfo. The Office of the  RA Human Rights Defender reacted sharply to the statements of the  Armenian Ministry of Defense about the groundlessness of the message  of Ombudsman Arman Tatoyan of October 18, where the latter  particularly noted that the Azerbaijani armed forces, which  unlawfully invaded the RA Gegharkunik region, were carrying out  active fortifications in the immediate vicinity of the RA villages,  including road construction, accumulated a large amount of firewood,  etc.

The statement of the Office of the RA Ombudsman states that after  this statement of the Ministry of Defense of Armenia, a campaign was  actually launched to discredit the activities of the Human Rights  Defender, which was joined by the Secretary of the Security Council.

"Firstly, the reason for the Ombudsman's statement on October 18 was  that the actions of the Azerbaijani armed forces grossly violate such  vital rights of the civilian population of the RA as a safe and  peaceful life, the right to property, etc. (civilians are fired upon,  people cannot use their lands, etc.). The Defender continues to  receive numerous alarms and complaints from citizens. And this and  any other statement of the Human Rights Defender is based on reliable  and factual data, "Tatoyan's Office stressed.

The Office of the Human Rights Defender emphasized that the purpose  of the statement of October 18 was to show the illegal actions of the  armed forces of Azerbaijan, the direct connection of these actions  with the encroachment on the life, property and other vital rights of  civilians in the Republic of Armenia. "The fact is that such actions  are followed by their subsequent criminal activities, including  terrorist acts against civilians and the armed forces, which protect  the right to life, safe and peaceful life of this population and  other vital rights," the message added.

The Ombudsman's Office stressed that the statement of October 18 is  based on facts that the staff of the Human Rights Defender  systematically collect based on the results of daily monitoring and  alarming research of recent months.

"Therefore, officials of the administrative apparatus of the Ministry  of Defense, who decided on October 19 to issue a statement in which  they questioned the results of the monitoring meetings of the RA  Ombudsman regarding the illegal actions of the Azerbaijani Armed  Forces, should always remember that the Defender never makes  exaggerated statements, and even more so containing inaccuracies.

If the Human Rights Defender makes any public statement, then he has  convincing evidence of this, not one, but at least several.  Therefore, we demand from the abovementioned officials of the  Ministry not to allow such short-sighted statements when reacting to  the reports of the RA Ombudsman, "the statement reads.

At the same time, the Office of the RA HRD stated that the officials  of the RA Ministry of Defense, who came out with a refutation of the  exact data of the Ombudsman in defense of human rights, in order to  mitigate political discontent, should have understood that by such  actions they also generate an Azerbaijani campaign in the  international arena not only on this statement, but also against the  credibility of the Defender's activity in general.

The Office of the Ombudsman pointed out that the Azerbaijani media  used this statement of the RA Ministry of Defense to their advantage  and launched a campaign to discredit the activities of the Office of  the Human Rights Defender of Armenia regarding the border situation  on international platforms.

"Therefore, it should be borne in mind that the reports and  statements of the HRD are made, even if they may cause political  discontent, but instead they become a valuable source for the  protection of the rights of RA citizens, used in international  instances such as the International Court of Justice, the European  Court of Human Rights, etc.

The reports and statements of the Ombudsman are always based on  primary sources, and not on indirect and distorted data. They are  valuable because they are the result of independent work," the RA  Ombudsman Office added, while accusing the Armenian Defense Ministry  of unwillingness even to support Tatoyan's initiative to create a  security zone around the border with Azerbaijan, which is becoming  more widespread in the international arena, and which is aimed to  protect the life of the civilian population and military personnel of  the Republic of Armenia and other rights from Azerbaijani criminal  acts.

Tatoyan's Office also stressed that they have always closely  interacted with the RA Ministry of Defense and acted in this  cooperation on the principle of "do no harm", and they expect the  same attitude towards themselves.

"And the statement of the RA Human Rights Defender of October 18  concerned exclusively the criminal actions of Azerbaijan. This is not  about the servicemen selflessly serving in RA positions. We invite  the newly appointed Governor of Gegharkunik to study in detail the  principles of the Human Rights Defender of Armenia, the results of  work and the current situation in order to improve awareness ",  the  Office of the HRD added, expressing the hope that close cooperation  with the administration of Gegharkunik region will also continue.

In conclusion, the office of the HRd posted several videos confirming  the illegal incursions of Azerbaijanis into Gegharkunik region of the  sovereign territory of the Republic of Armenia, as well as the  strengthening work of their servicemen in the immediate vicinity of  the villages in Gegharkunik.