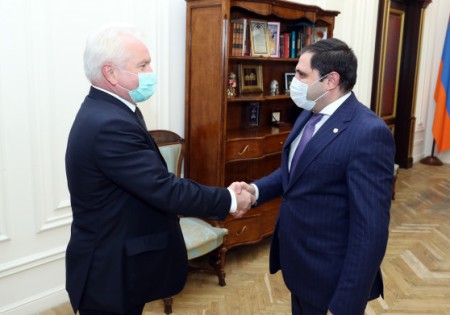 During the meeting, the Deputy Prime Minister welcomed the visit of  Russian officials to Armenia, their participation in the 8th  Interregional Armenian-Russian Forum, regarding it as an important  event for the development and strengthening of Armenian-Russian  relations.

During the meeting, the parties discussed the broad agenda of the  Armenian-Russian relations. It was noted that there is great  potential in bilateral relations, which should be used appropriately.  The interlocutors touched upon the issues of economic cooperation and  the implementation of new initiatives and programs.  Suren Papikyan  expressed his readiness to contribute to the implementation of these  agendas, emphasizing the role of Russia in establishing stability in  the region, as well as in creating platforms for resolving issues.   Referring to the meetings held in Moscow within the framework of the  Russian Energy Week conference, including with Russian Deputy Prime  Minister Alexander Novak and Rosatom State Corporation Director  General Alexei Likhachev, Papikyan stressed the importance of the  agreements reached in the multifaceted development of  Armenian-Russian relations.