RA Deputy Defense Minister: I unequivocally confirm the information  provided by the National Security Service of the Republic of Armenia  on Mount Pela 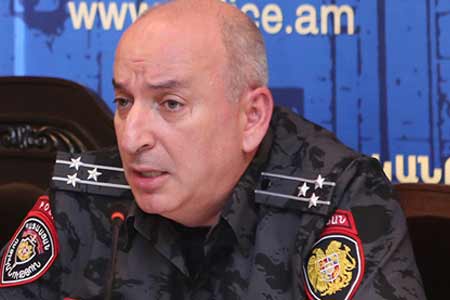 ArmInfo.The National Security Service of the Republic of Armenia has already issued a statement on the situation around Mount Pela. Armenian Deputy Defense  Minister Arman Sargsyan stated this in an interview with journalists  in the Armenian parliament, referring to the information about the  transfer of the Mount Pela in the Syunik region of Armenia to  Azerbaijan.

" I unequivocally confirm the information provided by the RA NSS," he  said, assuring that the Ministry of Defense does not seek to hide the  ongoing processes and, whenever possible, gives public explanations.   According to him, in Armenia, based on the structure and scale of the  state, it is in itself impossible to hide or conceal something.

At the same time, he recalled that issues related to the positions of  the RA Armed Forces, places of deployment of troops, the distance  between them are regulated by the law on state secrets and if some  information is not provided, then it falls under these regulations.

To clarify the journalists, if he has any information on the part of  the fortification work carried out by the Azerbaijani military  invading the territory of the RA, which is alarmed by the RA  Ombudsman, Sargsyan said that he was not going to comment on the  statements of the Human Rights Defender, just as he did not intend to  say what works are held in the RA Armed Forces in preparation for the  winter period.

It should be noted that on Saturday, MP from the Hayastan bloc Anna  Grigoryan announced that the Armenian authorities are going to  transfer Mount Pela under the full control of Azerbaijan, which will  make the residents of several villages in the Kapan region under the  direct sight of the Azerbaijani Armed Forces. On October 18, head of  the Kapan community, Gevorg Parsyan, told the Armenian media that the  mountain completely came under the control of Azerbaijan, as a result  of which the road, which also served the residents of the adjacent  villages, was blocked.

He also noted that the agreement on the delivery of the Mount was  reached in the winter of 2021, although even according to Google  maps, most of the height is located on the territory of the Republic  of Armenia. Nevertheless, the NSS of Armenia issued a statement in  which it refuted this information, stating that the Armenian border  guards continue to serve on Mount Pela. "In the area called the Mount  Pela in the Syunik region, there were no positional changes. The  border troops of the RA NSS continue to serve on this section of the  state border," the RA NSS reported.