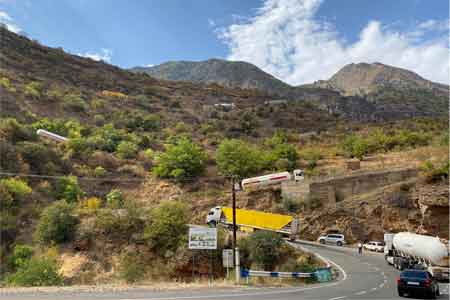 ArmInfo. There are certain ideas and preliminary agreements on the opening of the railway as part of the unblocking of communications in the region. Deputy Prime Minister Mher Grigoryan stated this to journalists on October 19 on the  sidelines of the 8th Armenian-Russian Interregional Forum, commenting  on his upcoming visit to Moscow.

Earlier it was reported that the delegation of the Armenian  government, headed by Deputy Prime Minister Mher Grigoryan, will be  sent to Moscow on October 20-21.

According to the Deputy Prime Minister, the next meeting of the  working group with the participation of the Deputy Prime Ministers of  Armenia, Russia and Azerbaijan will take place in Moscow. As  Grigoryan pointed out, the agenda of the working group has not  changed. " We have certain ideas and preliminary agreements,  according to which the settlement of the blockade will be carried out  within the framework of the CIS legal regulations. We should also  discuss the issues of opening highways," Grigoryan said.

At the same time, as the Deputy Prime Minister stressed, Armenia's  priorities are known - unblocking communications in all possible  directions.

It should be reminded that an agreement on unblocking regional  communications was reached on January 11 this year at a meeting in  Moscow of the leaders of Russia, Armenia and Azerbaijan. Then, for  these purposes, it was decided to create a working group at the level  of deputy prime ministers of the three countries, which will focus on  establishing transport and economic ties in the region.

On June 1, in an interview with reporters, acting Deputy Prime  Minister of Armenia Mher Grigoryan said that the dialogue on the  platform of the trilateral working group of Armenia, Russia and  Azerbaijan was interrupted. According to him, at present the work of  the working group has been suspended, in particular, against the  background of the aggravation of the situation on the border with  Azerbaijan. "I have repeatedly said that the work will be effective  if its background and situation are at least stable. In light of the  current situation at the border, I do not think that constructive  work on this platform is possible, and recently contacts on it have  ceased," he said.

On August 17, the website of the Russian government reported that  Deputy Prime Ministers of Armenia, Azerbaijan and Russia: Mher  Grigoryan, Shahin Mustafayev Aleksey Overchuk, resumed the work of  the trilateral Working Group. According to the source, at a meeting  held on August 17 in Moscow, the parties considered the prospects for  restoring transport communications in the South Caucasus region and  discussed the progress of further work carried out within the  framework of the statement of the President of the Republic of  Azerbaijan, the Prime Minister of the Republic of Armenia and the  President of the Russian Federation dated January 11, 2021.