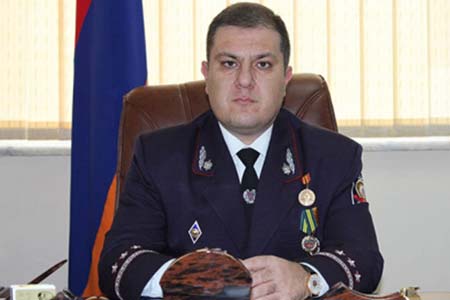 ArmInfo.Vladimir Hovhannisyan was relieved of the post of Deputy Head of the Special Investigation Service (SIS) of Armenia in connection with the abolition of the  department.

According to the official website of the government, the decisionwas  signed by RA Prime Minister Nikol Pashinyan on October 18.

SIS by the decree of Head of the Special Investigation Service of  Armenia Vahram Shahinyan of June 4, 2013.

To recall, in March 2021, the parliament in the second and final  reading adopted the package of bills submitted by the government "On  the Anti-Corruption Committee" and related projects, which also  provide for the abolition of the Special Investigative Service.

As then Minister of Justice of the Republic of Armenia Rustam  Badasyan noted in his speech, appointments to the new body, including  to leadership positions, will be made within the framework of an open  competition. At the same time, as the minister noted, for the  employees of the committee, in contrast to employees of other  investigative bodies, stricter requirements and restrictions will be  introduced.  Accordingly, they will be provided with additional  guarantees for the full implementation of their activities.

As a result, according to the former head of the Ministry of Justice,  staff reductions will begin in a number of bodies that previously,  within the framework of their powers, were engaged in combating and  countering corruption. We are talking, in particular, about the  National Security Service, the Special Investigative Service, the  Investigative Committee and the State Revenue Committee. These  employees are planned to be merged into the new body- Anti-Corruption  Committee. The number of employees of the new department will be  about 150 people, including at least 30 investigators and 60  detectives.

The new single body for the detection and investigation of corruption  crimes, which is already headed by the former head of the SIS Sasun  Khachatryan, will carry out, among other things, operational-search  activities.