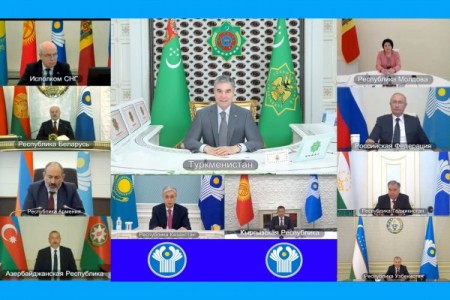 ArmInfo.On October 15, 2021, the meeting of the Council of the Heads of States of the Commonwealth of Independent States took place in the format of videoconferencing.

During constructive dialog the leaders of the CIS countries exchanged views on broad range of issues of international and regional agenda. Within the framework of the current Summit which is being held in the jubilee year of the founding of the CIS, the results of the multi-format partnership in the frame of the Commonwealth were summed up and perspectives of its further development were considered.

In his speech at the meeting President Gurbanguly Berdimuhamedov having congratulated the participants with the 30th anniversary of the founding of the CIS, noted that “Turkmenistan is wholly ready to continuation of close interaction within the framework of the CIS. Today the Commonwealth proves its vitality, ability to responsibly deal with challenges and threats and serves as the important tool of interstate dialogue”.

He underlined the importance of promoting economic vectors and interests of the CIS beyond geographic borders of the Commonwealth, integration into joint projects of neighboring countries, neighboring regions. First of all it concerns the creation of transport-transit infrastructure, optimization and expansion of energy supplies, laying of new lines of communications, noted President of Turkmenistan.

During the meeting of the Council of the Heads of States of the CIS the results of joint activities in the current year were summed up, priorities for the future were outlined. The participants expressed gratitude to the Republic of Belarus for successful chairmanship in the CIS during the current year and welcomed the chairmanship of the Republic of Kazakhstan in the CIS in 2022.

Following the High-level meeting, the participants made a number of decisions to deepen cooperation in humanitarian, law enforcement, migration and other fields of joint interaction.