Aliyev continues to try to assert himself through Armenia, shaking  the air with empty statements 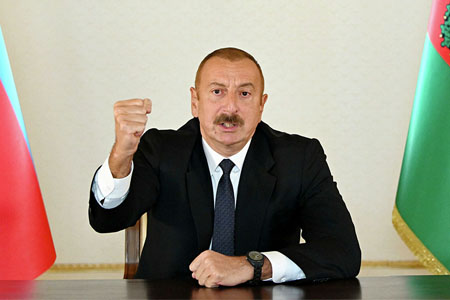 ArmInfo. Azerbaijani President Ilham Aliyev again decided to assert himself through  Armenia, now on the fields of the CIS. So, on October 15, speaking  via video link at a meeting of the Council of CIS Heads of State, he  once again stated that Azerbaijan is ready to begin negotiations with  Armenia on border demarcation with "mutual recognition of territorial  integrity" and to begin negotiations on a peace treaty with Armenia.

At the same time, Aliyev did not specify what he means by the wording  "mutual recognition of territorial integrity", especially if one  considers that the Azerbaijani Armed Forces today occupy a number of  areas on the sovereign territory of the Republic of Armenia.  Moreover, he kept silent about the fact that just a week ago an  Azerbaijani sniper killed a civilian in Artsakh. He then accused  Armenia of refusing to transfer complete maps of the minefields, and  according to him the previously transmitted ones are 25% accurate.   But, at the same time, Aliyev forgot to tell his colleagues in the  CIS that for almost a year now, the Azerbaijani side continues to  illegally, in violation of the agreements reached, detain hundreds of  Armenian prisoners of war and civilians, that dozens of Armenians  were tortured in captivity.

In his loud statement, the permanent Azerbaijani leader did not  forget to "throw a stone into the garden" of neighboring Iran and  unproven and categorically stated that for 30 years Armenia allegedly  in "collusion with Iran used the territory of Nagorno-Karabakh to  carry out drug trafficking" to Europe.

At the same time, he forgot to tell that hundreds of terrorists and  mercenaries settled in Azerbaijan and participated in a large-scale  Azerbaijani-Turkish military aggression against Artsakh. He also  announced his readiness to start delimiting the border if Azerbaijan  and Armenia simultaneously withdraw troops from the border.  Meanwhile, the Armenian troops are already at their borders and they  have nowhere to retreat.  Aliyev also forgot that there are no  elementary diplomatic relations between the two countries.