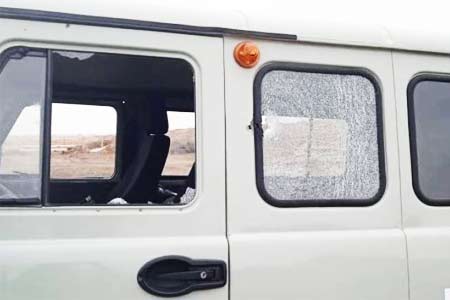 ArmInfo. Units of the Armed Forces of Azerbaijan on October 15 at about 9 am opened fire on the ambulance of the Defense Army unit located in the northeastern  direction of the Republic of Artsakh.

As reported by the Artsakh Defense Army, there are no casualties from  the Armenian side. The command of the Russian peacekeeping forces in  the Republic of Artsakh was informed about the incident.  The  Ministry of Defense of the Republic of Artsakh declares that it  continues to observe the ceasefire and calls on the Azerbaijani side  to refrain from destabilizing actions.

Earlier it was reported that in the evening of October 14, the  Azerbaijani Armed Forces opened fire on a combat post deployed in the  eastern direction of the Republic of Artsakh. As a result of the  shelling, six servicemen received gunshot wounds. As State Minister  of Artsakh Artak Beglaryan said, nothing threatens the lives of the  wounded soldiers. According to the Defense Ministry of Artsakh, after  the incidents on the border, the operational-tactical situation is  currently stable: there are no positional and territorial losses from  the Armenian side.